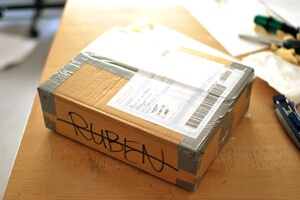 Ever wondered what it was like to be a parcel? No? Silly you. Ruben van der Vleuten thinks you should know. So he’s made a video from a parcel’s point of view.

The inquisitive Industrial and Interaction designer had three questions about mail delivery:

What happens when you send something by mail?
What happens in between you sending it off and someone else receiving it?
What people and processes are involved and how many steps does it take?

Of course, he could probably get these answers through a series of interviews and internet searches. But instead, he placed a small camera in a box with an Arduino-run timer circuit to record a 3 second video each minute and longer videos while the box was being handled. And then he shipped it.

I like his method better, because now we have this really cool video to watch.

From A to B from Ruben van der Vleuten on Vimeo.