US Takes Gold in Bot Hockey at RoboGames 2013 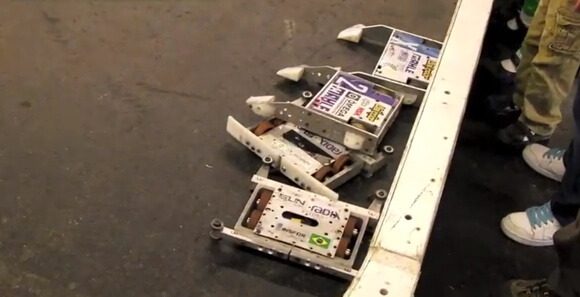 Gentleman, some ground rules first. No caltrops, spike strips, cattle prods, or stun guns. No spears, hammers, saw blades, lasers, or flame weapons. We’ll play three 3-minute periods. If all players die in any given period and cannot be resuscitated by the next period, the team with the highest score wins. Okay? Let’s play some robot hockey.

The rules of bot hockey are the same as ice or street hockey (with a few notable exceptions pertaining to weapons, of course). Most of the robots in this video are wheeled, but the specifications allow for hopping, jumping, shuffling, and hovering. Six fifteen pound radio-controlled robots (three to a side) herd and shoot a street hockey puck into goals on either end of their 24’ X 12’ rink.

Bot hockey is but one event at RoboGames 2013, the tenth annual Olympics of Robots in the San Francisco Bay Area. (We’ve covered them from time to time, here and here.) Boasting over 50 events, competitors from all over the world get together to pit their robots against each other in soccer, sumo, basketball, painting, bartending, kung fu, and mech warfare.

There are cash prizes, of course, but nothing compares to taking home a medal—gold, silver, and bronze with your name on a scrolling LED display. (Team Kick-me from the US took gold in bot hockey.) Fun times? No doubt. Educational? Check. Advancing science for the good of all humankind? Yup.

For more on RoboGames, check out this short documentary: