DARPA’s Robotic Hand Can Unlock and Open Your Door 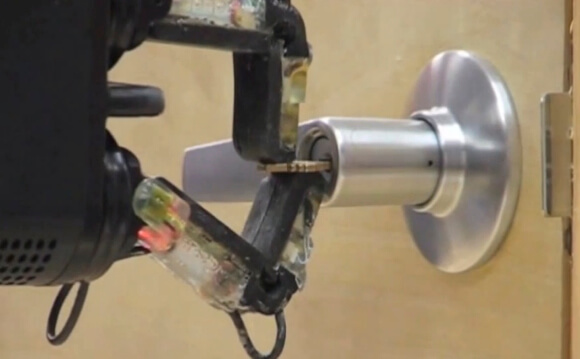 Engineers often turn to nature for inspiration, but working from evolutionary blueprints isn’t always necessary. The Defense Advanced Projects Agency (DARPA) recently showed off a dexterous robotic hand that uses three fingers, instead of a human-inspired four fingers and opposable thumb configuration. And the thing can unlock and open doors. Yikes.

The hand, developed by iRobot with support from Harvard and Yale, is part of DARPA’s Autonomous Robotic Manipulation (ARM) program. ARM aims to move beyond “remote manipulation systems that are controlled directly by a human operator.” The goal is to build systems that are robust, dexterous, and low-cost.

The DARPA hand uses Kinect to zero in on the object’s location before moving in to grab the item. It can pick up thin objects lying flat, like a laminated card or key. The hand’s three-finger configuration is versatile (can pick up a wide range of shapes, textures, and sizes), tough (used as a baseball tee), and strong (maintaining its grip on 50-pound weights).

Although its Kinect sensor begins to incorporate some autonomous capability, the hand still requires an operator for manipulation of objects in its fingers. But the ARM project is divided into hardware and software. The displayed tech is in the former category, and presumably, the latter category is still being developed.

The hand isn’t yet cheap by everyday standards, but the production cost has been dramatically reduced. Hands fabricated in batches of 1,000 or more can be produced for $3,000 per unit. According to DARPA, that’s an order of magnitude less than the current cost of $50,000 per unit for similar technology.

While such tech may find use in hazardous situations on the battlefield—defusing IEDs, perhaps—it’s not hard to see how there may be as many or more peaceful applications in factories or even at home. And it’s nice to see robot hands evolving. Three fingers are an improvement on all those clunky two-fingered pinchers robots always seemed to sport in the 50s and 60s. (Yes, there might have been humans in those robots—but still.)