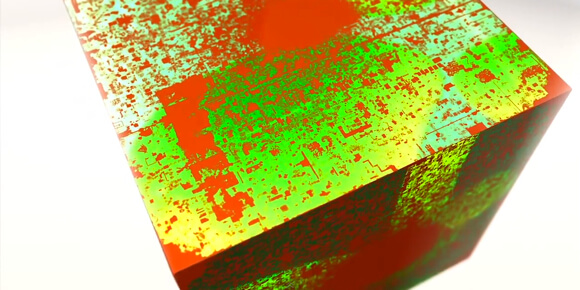 Bryan Henderson hails from Edinburgh, Scotland. He’s 18 years old and recently became a god. Henderson won the collaborative, cube-destroying game Curiosity—What’s Inside the Cube, and he’s reportedly still a bit “baffled” as to how it happened.

Dedicated “cubenauts” penned entire gaming diaries observing the cube’s evolution, pondering the meaning of the experiment, and theorizing what was in the mysterious center. Each new layer revealed seemingly random images or plain colors, serving as the digital substrate for innocent messages and lewd graffiti alike—only to be wiped clean by the masses and defaced again.

Molyneux said, “One person went on there and sketched the Twin Towers. Then someone else drew a plane crashing into them. And then someone changed all that into a big peace sign.”

Over the months, the hype and cube-destroying momentum died down. Cube-diarists were getting cube-fatigued. In May, Molyneux told Wired, “I think six months is a long time for this to go on. We’re on the cusp of it being forgotten about.” So, the team announced players had reached the final fifty layers—apparently there was no predetermined number—and that the center was imminent.

Henderson, meanwhile, was largely unaware of all these goings on. He registered and started playing Curiosity an hour before it all ended. Idly tapping away at a section in need of tapping, Henderson destroyed the final cube, unlocked the game’s prize video, and watched as Molyneux told him the following:

Henderson will become god of 22Cans’ upcoming video game, Godus, setting the rules and morality of the game and reaping a small percentage of sales. So, after millions of users tap-destroyed billions of cubes over six months, we finally know exactly what was in the middle of the cube. Fame, fortune, and god-like powers. Sort of.

It’s tempting to assign meaning to Curiosity. But perhaps as much as the game was a social experiment (feel free to theorize below), it was more centrally a clever advertisement for Godus—even serving as billboard for the developer’s successfully funded Kickstarter mid-cube campaign. The fact that 22Cans effectively crowdsourced advertising for a crowdfunded video game is itself a notable development.