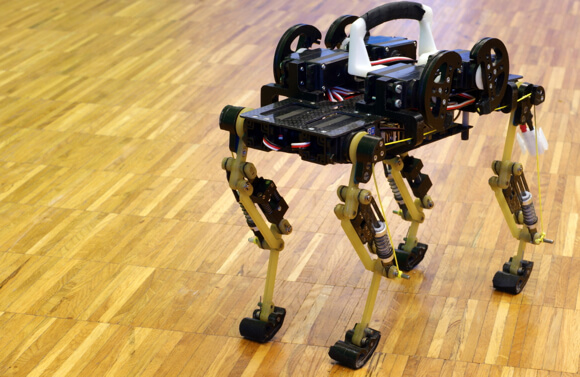 Cheetah-cub is about 21 centimeters long and weighs a kilogram—roughly the same size as its namesake or, less provocatively, a common house cat. Its top speed is about 3.2 miles per hour, or seven body lengths a second.

All this is electrically controlled by an external power source, requiring a power cable.

Like many quadrupedal robots, Biorob says future applications may include sending these robots where other machines on wheels or tracks can’t go—for example, rough terrain on emergency or reconnaissance missions. At a trot, the robot can successfully navigate steps up to 20% of its leg length.

The EPFL team built the robot using mostly off-the-shelf parts, as opposed to expensive custom components. Cheetah-cub is cheap, tough, and easily assembled which, added to its other attributes, makes it a useful research design.

Most of all, it’s fun to watch these guys trundle around and imagine that, no matter how advanced they are now, no matter how crucial a stepping stone this research is—they’ll probably look comically awkward in a decade.