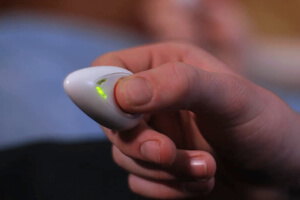 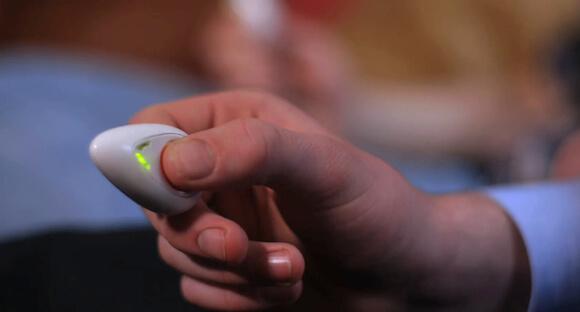 Most of us know when we’re stressed. Physical cues like stomach butterflies, a flushed face, or muscle tension are hard to miss. Problem is, said symptoms can be very difficult to control. Once going—these things tend to snowball.

The PIP biosensor Kickstarter aims to help folks mediate stress by objectively measuring symptoms, digitally visualizing the results, and then gamifying stress reduction. It’s the latest in an avalanche of sensors aiming to increase body awareness and health.

How does it work? The PIP measures Galvanic Skin Response—or changes in the skin’s conductivity as a stressful situation sends the heart racing and activates the sweat glands. The biosensor, held between thumb and forefinger, relays this information by bluetooth to a mobile device (Android or iOS) where an app interprets and displays it.

Folks interact with one of three games designed to develop biofeedback and thereby gain “conscious control over an aspect of their psycho-physiological state.” By gamifying the experience, people are motivated to play repeatedly, figure out what works, what doesn’t, and improve along the way.

The various pledge levels include the PIP device, games, and for top tier contributors, a trip to Ireland (no flight but two nights in a posh Dublin hotel) to meet the team, brainstorm the PIP’s future, and celebrate over a few pints at the pub. If the $100,000 goal is funded, the team hopes to deliver the devices by February, 2014.

It’s a cool idea, but the PIP isn’t entirely novel. Meditation is that other self-awareness “game” that’s been played for a few millennia. Thing is, meditation isn’t for everyone and can be challenging to master. Maybe by way of a few modern tricks, PIP proves the ideal gateway device to a more enlightened populace, or at the very least, a more relaxed one.