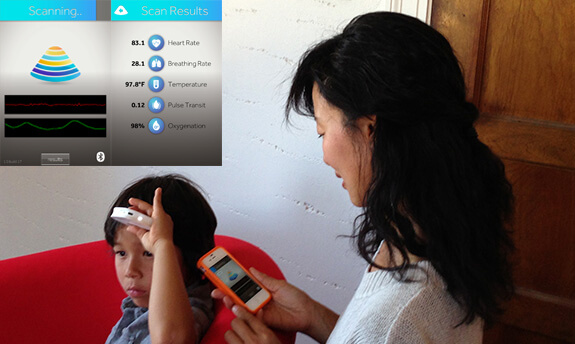 Over the years, it has become increasingly evident that Star Trek is a highly influential — if not the most influential — work in science fiction that has inspired generations of people to pursue science and technology careers. Every day we edge closer to many of the show’s imagined 23rd century technologies, but perhaps the one that arguably has been the most sought after is the tricorder, a device with sensors that can scan, analyze, and record data on pretty much anything. While an environmental tricorder that analyzes a geographic region would be advantageous for scouting new frontiers, it was the show’s medical tricorder able to detect injury and disease rapidly that held such a degree of technological wonder that it almost seemed magical or otherworldly.

But not any more — a first version of a medical tricorder is within reach, thanks to a startup named Scanadu.

The device, called a Scout, is a handheld, disc-shaped sensor that when placed against the forehead for 10 seconds, will monitor vital signs, including temperature, respiratory rate, blood oxygenation, heart rate, and systolic and diastolic blood pressure. Additionally, it performs an electrocardiogram and assesses “stress” as a custom metric. The Scout transmits these data to an integrated smartphone app that can record, track, and analyze vital signs providing a single “comprehensive healthfeed” for multiple users.

And the Scout isn’t  just a crazy proposal – it’s a real device that was recently profiled on Bloomberg TV and is coming to stores next year.

Check out the pitch video for the Indiegogo campaign to learn more about the Scout:

Now Scanadu has been able to raise funds in the past, as it did in 2011 when it brought in $2 million from investors. The team also has enjoyed support from NASA, as the Singularity University company is located at the AMES Research Park in Silicon Valley (in fact, the concept for the Scout was conceived after founder Walter De Brouwer attended a Future of Medicine Executive Program, one of SU’s premiere programs).

Crowdfunding, however, provides a sense of consumer reception and demand for a product.

With a few weeks left still, the success of this campaign bodes well for the Scout’s and Scanadu’s future. In fact, the startup has even laid out plans for its next device: the ScanaFlo, a disposable paddle that will convert a smartphone into a urine analysis reader to measure levels of glucose, protein, leukocytes, nitrates, blood, bilirubin, urobilinogen, specific gravity, and pH. It will even perform pregnancy tests.

The good news is that there’s still time to get the Scanadu Scout through Indiegogo. Head on over to the campaign page before July 11 to reserve a device and get your Star Trek on.