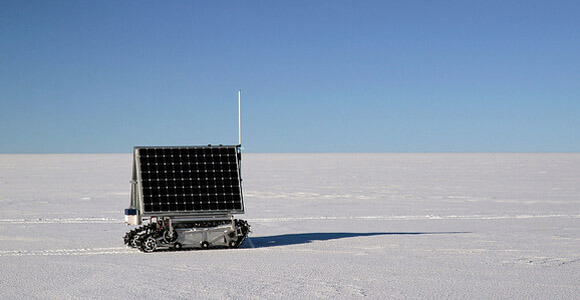 NASA recently concluded a successful six-week test of a prototype polar rover near the highest point in Greenland, where the robotic vehicle traversed icy terrain in temperatures of minus 30 Celsius to help scientists learn more about how ice sheets are faring in the changing climate — without having to break for hot cocoa.

Greenland’s ice sheets are an important area of research because if they melt, the Earth will reflect less of the sun’s energy and warm more quickly.

The rover — dubbed GROVER, for Goddard Remote Operated Vehicle for Exploration and Research or simply Greenland Rover — was first developed by engineering students who participated in Goddard Flight Center’s boot camp in 2010 and 2011. NASA has subsequently funded fine-tuning of the vehicle at Boise State University under the guidance of geoscientist Hans-Peter Marshall.

The students approached Goddard glaciologist Lora Koenig about building a robot that would assist her in her research on Greenland’s ice sheets.

“How it came to me as the scientist involved is the engineers came to me and said, ‘Hey, we want to build a robot, do you have any science that a robot could do?’ And I said, ‘Well, yes, actually I do,'” Koenig said in a NASA video about the project:

Glaciologists use radar to gather data about the thickness and topography of the superimposed layers of snow and ice in an ice sheet. Currently, radar devices are mounted on aircraft or on snowmobiles that scientists operate themselves.

A robotic rover that withstands arctic temperatures and moves across icy, uneven terrain would cost less than using aircraft and pollute pristine natural places less than gas-powered aircraft or snowmobiles do.

It would also spare scientists like Koenig hours of grueling exposure while also covering more ground in a day.

“When we’re on snowmobiles, we can get 50 to 75 kilometers in a day. You get cold, and you need to stop for the day. GROVER will go slower than we would with snowmobiles, but when it goes for 24 hours, which a human can’t, it will actually gather more data for us,” Koenig explained.

GROVER, a six-foot tall, 800-pound vehicle that moves on a set of repurposed snowmobile tracks, uses solar panels to power a pair of rechargeable batteries that run its radar and telecommunications devices. Because the sun never dips below the horizon in the arctic summer, the engineers had hoped the rover would be able to operate all day and night.

But in Greenland’s frigid temperatures, GROVER’s batteries drained faster and took longer to recharge than expected. Electronics also took longer to reboot. In the end, the robotic vehicle operated for 12 hours a day, rather than the hoped-for 24. 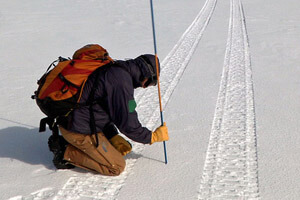 “This is very common the first time you take an instrument into an environment like Greenland. It’s always more challenging than you thought it was going to be,” said Boise State’s Marshall.

The researchers also had to continually tinker with the rover’s speed to prevent it from getting stuck in the snow and ice.

Still, GROVER’s data was good. It was able to collect measurements of the ice sheet that were detailed enough to isolate the melt layer that resulted from Greenland’s record high temperatures in 2012, one of the trial’s objectives.

GROVER joins the growing population of Earth-sensing robots that are taking more measurements, more often, in more remote places. These robots are casting an ever widening net of observation, supplying scientific models with rich data sets, and deepening our understanding of Earth’s natural processes.