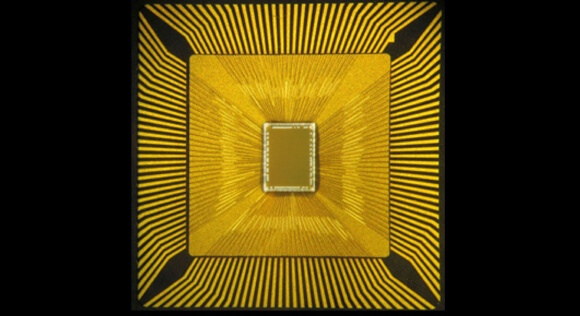 Engineering is often inspired by nature—the hooks in velcro or dermal denticles in sharkskin swimsuits. Then there’s Darpa’s SyNAPSE project. Not content with current computer architecture, SyNAPSE is building a new kind of computer based on the brain.

Last year, scientists working on SyNAPSE announced they’d simulated 100 trillion synapses from a monkey brain on Sequoia, one of the world’s most powerful supercomputers. Now, instead of simply writing brain-inspired algorithms for traditional systems,  they’ve invented an entirely new “neuromorphic” chip, True North, and an accompanying programming language to build applications on it.

IBM’s Dharmendra S. Modha, who heads up SyNAPSE, says, “It doesn’t make sense to take a programming language from the previous era and try to adapt it to a new architecture. It’s like a square peg in a round hole. You have to rethink the very notion of what programming means.”

The way computers currently manipulate information, shuttling it back and forth between memory and processor, is named after the early computer scientist John von Neumann. Classical computing is very good at number crunching—or left-brain activities. In fact, it vastly outstrips human capabilities.

True North is built on a network of “neurosynaptic cores” that place memory, processing, and communication close to one another so they can operate in parallel, much as they do in the brain.

Just as von Neumann computing required a specialized programming language (Fortran), Modha says SyNAPSE’s new architecture needed the same—so his researchers wrote a new language from the ground up, and began organizing and simplifying it for future scientists and software developers.

Early on, programmers had to code individual neurosynaptic cores, but the language now includes 150 “corelets,” or groups of cores with similar functionality (eg., sound perception, edge detection, or color identification). Developers only need to know the general function of a corelet to integrate it into an application.

Beyond more fully realizing cognitive computing, SyNAPSE’s scientists hope the new chips and language will lead to computers as efficient as the brain—which consumes less power than a light bulb and takes up less space than a two-liter Coke.

That said, Modha and SyNAPSE aren’t under any illusions that they are actually recreating the brain in all its splendor.

That is, cognitive computing is to the brain what a mechanical wing is to a bird’s wing. It takes inspiration from the biological version, improving performance, but doesn’t seek to recreate every detail.

Eventually, Modha thinks cognitive chips will work in concert with classical chips, “We imagine a future computer which will ship with two processors. One is a classical von Neumann processor and one is a cognitive co-processor, which will be able to deal with real world environments in the way that we can.”