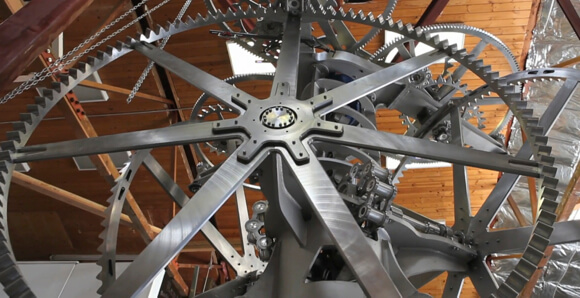 If you were worth a million dollars, you might buy a fine watch to measure time. Rolex, Breitling, Seiko, this watch could run a couple thousand dollars. If you’re Jeff Bezos, you spend $42 million on a 200-foot clock inside a mountain, engineered to withstand Armageddon and tick 10,000 years.

That sounds like a lot of money, but compared to Bezos’ $25.2 billion, it’s akin to our millionaire buying a single Rolex. No big deal for Bezos.

The last time we covered the 10,000 Year Clock project, Bezos was freshly aboard. Along with 3,300 smaller investors, the Long Now Foundation finally had enough money to make their clock tick. Bezos even provided a mountain in Texas for the clock’s setting.

The 10,000 Year Clock will have an 8-foot face, 700-pound gear wheel, 300-pound steel pendulum, and a never-repeating set of 3.65 million distinct chime sequences programmed by 10,000 Year Clock inventor and co-founder, Danny Hillis. Perched atop this apparatus, an orrery will display astronomical positions and the year.

So how close is the foundation to fulfilling their vision? In late 2011, the Long Now team successfully drilled a 500-foot deep, 12.5-foot wide shaft in their Texas mountain. Meanwhile, the foundation’s website is a wealth of clock parts—giant steel wheels and spinning gears—built on a Jack-and-the-Beanstalk scale.

The winder and main differential, key components of the power storage system, were the first parts completed. The clock derives power from visitors physically winding it or from a series of rods that change length as the temperature varies between day and night.

The steel power storage wheels wind a 75-foot geared steel spine, 20 feet of which is already built. Smaller elements (gears and rollers) are titanium with ceramic bearings. Although the system isn’t lubricated, it efficiently converts over 90% of the supplied outside energy into clock energy.

The foundation says they’ll build and install another clock for installation in a mountain in Nevada. But there’s no end date in sight for either location. These clockmakers take the long view—which is, of course, the point. The Long Now Foundation hopes their projects will get people to think about a much longer “now” than they do currently.

For some, the 10,000 Year Clock may frame our place in time like Voyager and Carl Sagan’s “pale blue dot” framed our place in space. (See here for author Michael Chabon’s clock meditation.) More importantly, the Clock of the Long Now gets people thinking about the future.

If the clock’s construction marks civilization’s middle age—halfway between its birth 10,000 years ago and the clock’s 10,000-year future lifespan—are we at the graph’s apex or the midpoint of an upward slope? The late 19th and early 20th centuries were optimistic about the future. Perhaps naively so. But most of the last few decades have been fixated on a “no future” or end of civilization scenario.

Maybe the doomsayers are right, and after civilization’s ultimate demise, some lone druid will live in the mountain, the caretaker of a magical device whose art has long been forgotten. Then again, maybe not. We can’t know the future, but we can imagine it, and in the imagining, create its likeness.