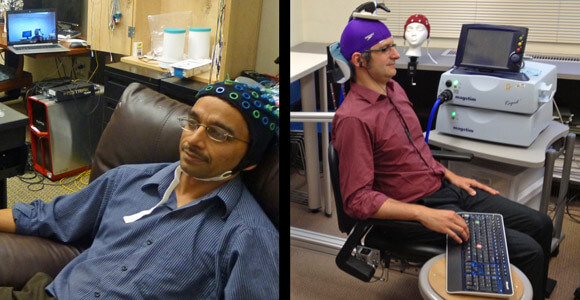 A network of connected brains is the Holy Grail of Internet communications: Rather than type out an email, one user simply sends his or her thoughts directly to another.

Researchers at the University of Washington recently moved one step closer to that goal with an experiment in which a researcher in one building controlled the hand movements of a colleague in another building. 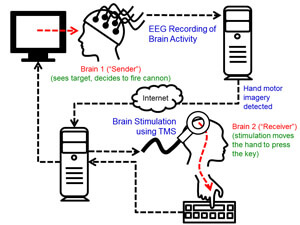 Stocco’s colleague Rajesh Rao, a professor of computer science, was hooked up to an EEG machine as he played a simple video game in which he was tasked with firing on targets. Rather than fire with a click of the mouse, Rao simply thought about moving his finger.

Meanwhile, Stocco sat in his lab across campus with a transcranial magnetic stimulation coil, or TMS, placed over his left motor cortex, which controls hand movement. Stocco had his hands on a keyboard but could not see a computer screen.

A computer program read the EEG signals to determine if Rao had engaged in motor imagery. If he had, it stimulated the TMS via an Internet connection. When Rao envisioned firing, Stocco’s finger almost instantaneously twitched and depressed the space bar. Stocco said moving his finger felt like a nervous tic.

The experiment was not published in a peer-review journal, but it was recorded on video:

The primitive “brain net” builds on the work of other scientists who have also endeavored to use Internet technology to connect brains.

In February, Duke’s Miguel Nicolelis showed that two rats whose brains were mechanically connected by way of implants could collaborate on a task. One rat’s brain activity was recorded as it learned to press the correct lever to a food reward. Its brain activity was sent over the Internet to another rat, whose ability to find the correct lever exceeded what chance would dictate. The study suggested that, in successive trials, the sending rat learned to clean up its thoughts to make them more legible for the other rat, so that it could get the psychological reward it shared with the other rat when it succeeded at its task.

In Rao and Stocco’s study, Stocco similarly became more successful “firing” on command from one trial to the next.

In April, Harvard researchers had human subjects connected to EEG machines stimulate movement in a rat. Like the U.W. experiment, this one worked by isolating a particular signal from the EEG: The human participants were shown a visual pattern on a screen that led them to sync their brain waves and produce electrical activity in the same frequency. When the EEG observed that frequency, it triggered a focused ultrasound prod in the part of a rat’s brain that controls its tail. The tail moved.

Still, none of the efforts has really come close to transmitting a fully formed thought from one person to another.

Rao noted that his study managed “a one-way flow of information.”

“The next step is having a more equitable two-way conversation directly between the two brains,” he said.

But even sending a movement from one person to another, as the U.W. researchers did, could have powerful applications. For example, a person with disabilities could communicate basic needs to a helper. Or a pilot on the ground could help a flight attendant or passenger land an airplane if the pilot in the air became incapacitated, the researchers said. And precisely because the system doesn’t communicate actual thoughts, participants don’t have to speak the same language to use it.

And with this field of inquiry seeing so much activity, mechanical-assisted telepathy could be here sooner than anyone outside of Hollywood expected.

This Robot Taught Itself to Run, Then Set a Record By Running a 5K