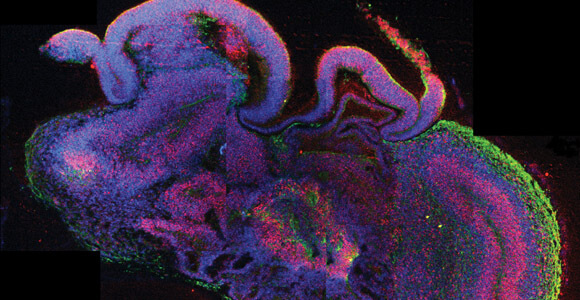 Austrian researchers have used regenerative techniques to grow a miniature human brain in the lab, they reported recently in the journal Nature.

The researchers started with pluripotent human stem cells, or stem cells that are capable of developing into various kinds of specialized cell. After letting them develop, they removed proto-neural cells and placed them on a scaffold. Using a bioreactor to improve cellular growing conditions, they obtained a brain-like organ that exhibited differentiated brain regions. 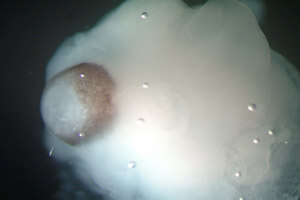 The mini-brains developed into distinct regions, including a cerebral cortex, retina (pictured), meninges and choroid plexus. But they stopped growing after two months. The Austrian researchers, led by Jurgen Knoblich of the Institute of Molecular Biotechnology of the Austrian Academy of Sciences, said that in the absence of a circulation system, the core of the mini-brains probably didn’t receive adequate nutrients or oxygen to continue growing.

So what would you want with a tiny lab-grown brain? Growing organs from stem cells is a hot field of research right now, with everything from teeth to hearts being grown in the lab. Most of those efforts aim eventually to use the organs as custom-made transplant organs. Such a system would solve the serious shortage of some organs and reduce the chances of patients rejecting transplanted organs.

A brain transplant has, of course, never been performed — although an Italian researcher recently argued that such an operation would be possible, if bizarre. (The recipient of a transplanted brain would also receive the donor’s knowledge and personality.)

Instead, the Austrian researchers think that lab-grown mini-brains could help advance research into the brain and its disorders.

The IMBA team demonstrated that the mini-brains could offer such a model. They first produced induced pluripotent stem cells from the skin tissue of a patient with microcephaly. By developing a mini brain from these cells, the scientists were able to grow a mini brain that had the same problem. Microcephaly is characterized by an abnormally small brain, which causes potentially serious developmental problems.

Observing the microcephalic mini-brain led the researchers to hypothesize that the disorder occurs when neural differentiation happens too soon during brain development, stymieing stem and progenitor cells which would otherwise spur additional brain growth.

The hope is that mini-brains can be produced to model other brain disorders as well. They could also provide a means of testing new drugs to ensure that they don’t cause brain defects or other disorders.