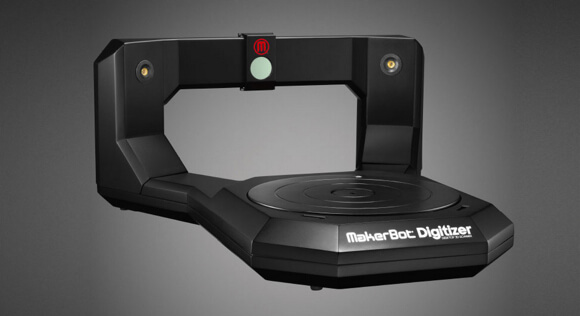 Let’s say you have a plastic steampunk gnome figurine sitting on your desk. You love that little guy—he reminds you to smile when the daily grind’s got you down.

But as you gaze at your favorite piece of kitsch, you realize he really ought to be wearing a top hat and have pointy ears. Even a year ago you’d be up a creek with no paddle. But no longer. MakerBot’s got your paddle right here.

The new MakerBot Digitizer—a $1,400 desktop 3D scanner that ships in October—can make a digital copy of your favorite gnome. The new digital model will be a standard 3D modeling file type that you can print, share, or manipulate. Pointed ears, top hat, bow tie, whatever.

The Digitizer scans objects on a turntable and constructs a digital 3D model using a camera and two lasers. The 3D model is watertight (i.e., no digital holes), within 2 mm the size of the original object, and captures detail down to 0.5 mm. The scanner does best with objects that aren’t shiny, fuzzy, or dark and measure less than eight inches in diameter and eight inches tall.

MakerBot CEO, Bre Pettis, says, “For professionals, this means you get a jumpstart on the design process because you don’t have to start from scratch. And for creatives at home, this means you get to explore the frontier of desktop 3D scanning and make wonderful designs that you can either print on your MakerBot or share on Thingiverse.com.”

What can’t the MakerBot Digitizer do? Well, according to MakerBot’s FAQ, users shouldn’t expect to be able to digitize a hamburger—and then print and eat your creation. That MakerBot felt compelled to add this little reality check is symptomatic of the rift between 3D printing hype and the reality of what the tech can actually do.

Though companies hope to bring the tech to a wider audience, the 3D printing market still largely consists of the technically proficient or chronically impatient. Which is probably why MakerBot very explicitly notes the Digitizer is ideal for “early adopters, experimenters, and visionaries who want to be pioneers in Desktop 3D Scanning.”

What about the price? MakerBot 3D printers start at $2,200. Add in a $1,400 scanner and you’re talking a significant investment. Even if the printers were intended for the mainstream, the cost is hard to justify for the casual hobbyist. But there may soon be a more economically priced option.

Earlier this year, Matterform raised $450,000 on Indiegogo to build a desktop 3D scanner of similar resolution (0.2 mm). Though still under development, the firm plans to sell their scanner for $599. Meanwhile, Autodesk’s 123D Catch app can create 3D models using no more than a smartphone camera. Though 123D Catch is distinctly less powerful and convenient than the Digitizer, it’s also free.

Cost aside—it will come down—the more 3D scanners, the better. Because scanners lessen the need to design and manipulate 3D models, they make the tech more accessible for more people.

As desktop 3D printer materials diversify, scanners may ultimately allow us to digitize and print household items, like a specialized replacement screw, a cup, a bowl, a box, or a door handle.

At least, that’s where the mind wanders—even if it isn’t possible yet.

But there’s another side to 3D scanning technology that threatens traditional purveyors of physical products. What’s to stop people from scanning and printing products instead of buying a replacement?

There’s no simple answer. A proliferation of desktop 3D scanners may result in a round of intellectual property battles akin to those waged in movies, music, and print over the last decade. Back in 2010, attorney Michael Weinberg anticipated the coming revolution with a detailed white paper on the subject.

In his paper, Weinberg says instead of waking up one morning and finding 3D printing ubiquitous, the technology will seep into the mainstream. And it’s during that process that we’ll hash out the legal ramifications of digitizing the physical world.