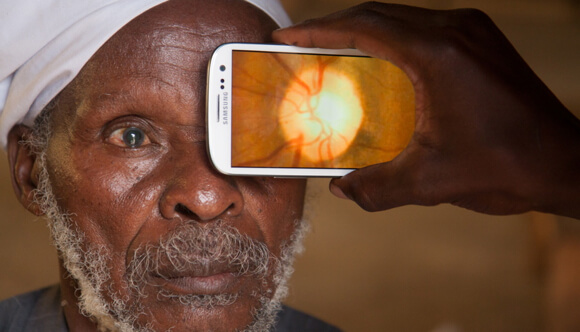 According to the World Health Organization (WHO), 90% of the world’s 285 million visually impaired folks live in developing countries. The vast majority of visual impairment—of which 76% is due to uncorrected refractive errors and cataracts—can be avoided or corrected. But care is hard to come by in remote rural areas.

Mobile computing and miniature sensors may  change all that by putting high quality diagnostics in pockets for pennies.

Peek, a smartphone eye exam system, is a great example of the power of mobile medicine. Using a smartphone and an external clip-on device, Peek can perform simple vision tests, check for cataracts, and even scan the retina for disease.

Last year, we wrote about another mobile vision test called NETRA. Developed at MIT, NETRA, is an external device designed to measure nearsightedness, farsightedness, astigmatism, age-related blurriness, and pupillary distance. After trials side-by-side with traditional equipment in over 5,000 cases, NETRA says their device is as accurate as a $45,000 eye exam machine.

Why is that so important? Traditional equipment is not only immobile but very expensive and requires specialized technicians to run. Therefore, modern eye exams are  available in densely populated areas but rarely in rural spots, where they’re most needed.

But as computing power becomes more ubiquitous, rural medicine should begin to converge with urban capabilities.

According to Peek, “In developing countries, more people have access to mobile phones than running water.” Why not make use of all those chips?

In 2011, Dr. Andrew Bastawrous, a driving force behind Peek, was organizing a large African study of eye disease. The challenges inherent in the study of a largely rural, diffuse population got him thinking about how a smartphone ophthalmic tool might make the study more effective.

Peek requires minimal training to operate and will be cheap or even free (not counting the cost of a smartphone, of course). After the information is gathered, it can be sent to experts around the world for diagnosis.

The app runs on Android and is currently being tested in Kenya—1,000 of 5,000 people so far—and the team will publish their findings at the end of the trials in early 2014. Thereafter, they hope to make the system widely available and compatible with the other major mobile operating systems (iOS, Windows, and Blackberry).

In the developed world mobile medicine is about timely diagnosis. If only we caught cancer earlier, we could more effectively treat it. In the developing world, the more urgent problem isn’t timeliness, it’s access; it isn’t convenience, it’s cost.

Low-cost mobile diagnostic systems like Peek or NETRA have the potential to positively impact millions of lives—whether that means prescribing the right pair of glasses or diagnosing cataracts for treatment.