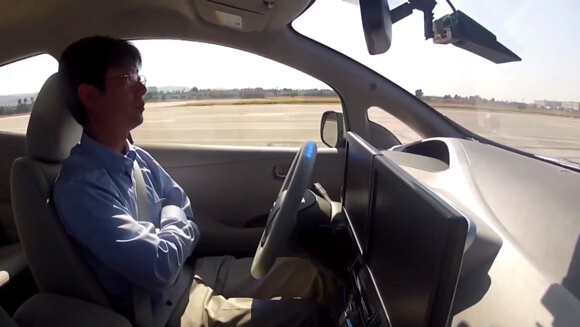 Earlier this year, BMW predicted cars would be highly automated by 2020 and driverless by 2025. Pretty cool, but perhaps a touch conservative. Nissan recently upped the bar.

It isn’t the first time Nissan has made bold projections. Back in 2007, CEO, Carlos Ghosn, said the company would bring a zero emissions vehicle to market by 2010—a promise they made good on with the Nissan LEAF.

The firm has been working on self-driving tech for years with universities including MIT, Stanford, Cal Berkeley, Carnegie Mellon, Oxford, and the University of Tokyo (among others), and during Nissan 360 they showed off their autonomous LEAF prototype.

The car monitors the surrounding environment using sensors, including cameras and laser, and artificial intelligence to autonomously navigate the road. The tech is an extension of Nissan’s Safety Shield system, which can warn drivers of dangerous situations and even take action when necessary.

To further develop self-driving tech for commercial deployment, the firm is building a test facility in Japan to be completed in early 2014. In brick-and-mortar townscapes, they’ll test their robot cars in extreme situations too hazardous for public highways.

The S-Class’ sensor suite is tied into the car’s control systems by 100 microprocessors, allowing it to autonomously stay in its lane, maintain a safe following distance, break before unexpected obstacles—even take the helm entirely for up to 15 seconds.

Meanwhile, Google is well out in front of traditional car companies in terms of full autonomy. The firm has been testing a prototype driverless car on public highways in Nevada and California for the last several years.

If you believe the buzz, it would appear autonomous cars are on the way, sooner rather than later. But is the hype being laid on a touch too thick?

MIT Technology Review posted a skeptical piece on the recent spate of news on autonomous cars. The article questioned one rumor that Google, working with parts manufacturers like Continental AG, would soon build its own cars, instead of merely selling self-driving systems to established companies.

Manufacturing cars is nothing like writing code—and setting up the required infrastructure would be a serious undertaking. 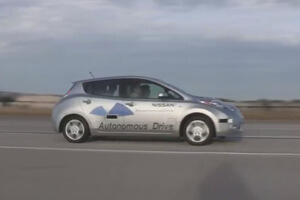 But Google seems to like the idea of applying their philosophy to products from the ground up. Consider the firm’s acquisition of Motorola to supply home-grown hardware (the Moto X smartphone) for their Android operating system.

What’s to prevent them from purchasing a car manufacturer, integrating their self-driving systems, and selling a car with the Google brand?

The MIT article goes on to note the Nissan announcement promises  “Autonomous Drive” technology by 2020, but falls short of specifically saying Autonomous Drive will be true self-driving technology.

The Nissan press release says, “In the future, Autonomous Drive also means less input from the driver.” Of course, “less input” is not “no input,” whatever Nissan executives have said. Maybe the firm is hedging its bets.

The MIT piece is right to note the frenzied tone driverless car tech has taken on of late. But there are solid trends behind the PR. Big companies from Google, to Mercedes, to Nissan are competing to make this happen. And they have the cash, expertise, and technology to back up the big talk.

Whatever the specifics of when, who, and how—it seems we are headed toward a future of fully automated autos.