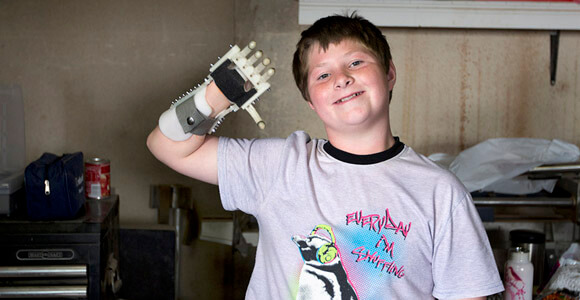 For $150, the 3-D printed Robohand also lets Dylan, who is missing the fingers on one hand as a result of Amniotic Band Syndrome, grab things with bendable fingers, which most prosthetic hands don’t.

Robohand consists of a set of fingers that respond by grasping and then opening when the user bends his or her wrist. It was designed by Richard Van As, a South African carpenter who lost four fingers in a circular saw accident, and Ivan Owen, a Seattle mechanical theatrical props designer. The two worked together and eventually hit upon 3D printing as a way to develop prototypes quickly and keep the final manufacturing cost down.

“When I cut my fingers off, it was on a Saturday afternoon, and I went to the hospital. I had actually decided when I was in the emergency room that I was going to make a set of fingers for myself,” Van As said in a video about the project.

Van As originally imagined making just fingers, but he soon began to encounter parents of children with Amniotic Band Syndrome, which affects 1 in 1,200 newborns mostly with malformed or missing fingers and hands. Van As decided to make an entire hand. Wearers who have partial fingers can still opt to attach individual finger caps directly to their own hands. 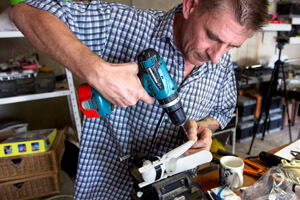 The hand is entirely printed but for the cables that connect the fingers to the cam, a moldable thermoplastic sleeve that makes the hand wearable and the bolts that hold everything together. It can be sized to fit children or adults with a few quick changes to the computer file that guides the printer.

Robohand is exactly the kind of uplifting DIY project that a 3D printing company wants to highlight. And so, when MakerBot discovered Van As and Owen collaborating to build the early prototypes on its Thingiverse platform earlier this year, the company gave them two Replicator 2 Desktop printers.

Van As and Owen have since provided free Robohands to four South African children, and the open-source design has been downloaded more than 3,500 times in just three months.

Robohand is in the process of obtaining non-profit status in South Africa.