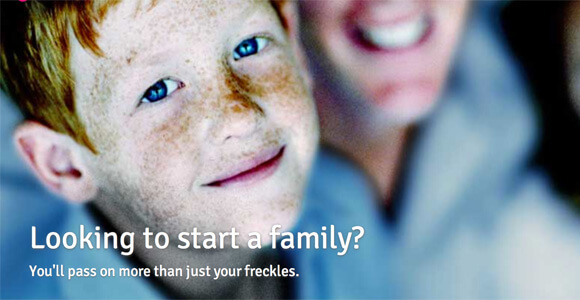 The Silicon Valley personal genetics company 23andMe has created a wave of controversy about “designer babies,” following its recent receipt of a patent for a system through which prospective parents could select sperm or egg donors most likely to give them children with specific characteristics, such as blue eyes or low risk of heart disease.

The patent application describes a system by which would-be gamete buyers can choose the traits that they want their children to have or not to have. The results return a list of donors ranked by the odds that their DNA, mixed with the other parent’s, will produce the desired characteristics.

23andMe, founded in 2007 by Anne Wojcicki, the now-estranged wife of Google co-founder Sergey Brin, said it has no intent to use the patent, for which it first filed in late 2008. The company currently uses a similar odds-making schema in a feature called the Family Traits Inheritance Calculator, which shows prospective parents who submit their DNA together which traits their offspring are likeliest to inherit. 23andMe does not work with fertility clinics.

“The company never pursued the concepts discussed in the patent beyond our Family Traits Inheritance Calculator, nor do we have any plans to do so,” 23andMe said in a blog post responding to the controversy. (The company declined Singularity Hub’s interview request.)

“The patent process takes years, and businesses often file patents without knowing exactly how they might be used (or if they will be used at all) so that they can protect an innovation. At the time 23andMe filed the patent, there was consideration that the technology could have potential applications for fertility clinics so language specific to the fertility treatment process was included in the patent,” the blog post further explained.

But with questions remaining about whether 23andMe will license the method for others to use, the company and the U.S. Patent and Trademark Office have come under fire for paving the way for commercial use of designer baby-making techniques, whose echoes of eugenics cause widespread discomfort. 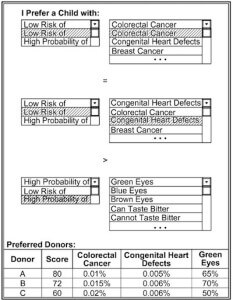 Even fertile couples could opt to use assisted reproduction techniques to conceive in order to exert some control over the appearance, health and abilities of their children, some fear. Many couples do so already to control the sex of the child.

“This project could foster the false belief that biology trumps social, economic and environmental conditions in influencing our health and well-being. And it could encourage the dangerous idea that science should be used to breed ‘better’ people, breathing new life into the specter of eugenics that has long hung over the field of genetics,” Marcy Darnovsky, the executive director of The Center for Genetics and Society, a nonprofit that encourages the responsible use of emerging human genetic and reproductive technologies, said in a news release.

Yet, the method patented by 23andMe does not make available information on more traits than is already available, nor does it guarantee that parents will get the results that they want, because many abilities and illnesses have unknown genetic components. The patented method simply introduces a lighter version of genetic screening that would seemingly come at a substantially lower cost.

Fertility clinics already use pre-implantation genetic diagnosis to screen embryos for many inherited diseases. The process is itself controversial enough to be legally restricted in some countries. Using it to search for more traits would add to its already considerable cost.

In 23andMe’s approach, sperm and egg donors would have their DNA tested, allowing the parent-to-be to choose which donor to use in order to optimize for particular characteristics before undergoing any assisted reproduction procedures. Still, as the patent makes clear, results come in odds, not certainties.

Even so, the method represents a clear move towards consumer applications for superficial genetic screening. In a letter published in Genetics in Medicine just after the patent was granted, European geneticists flagged the “hugely ethically controversial” issues inherent in the process.

They also raised questions about how the U.S. Patent and Trademark Office handles such controversial advances.

“At no stage during the examination of the patent application did the patent office examiner question whether techniques for facilitating the ‘design’ of future human babies were appropriate subject matter for a patent,” they wrote.

According to USPTO guidelines, inventions that are “offensive to public morality” cannot be patented. The office declined to comment further.

That criterion is rarely invoked by the patent office, the Genetics in Medicine letter notes. It was, however, invoked when the office rejected a notable genetic patent application, asking to protect the right to make a human/animal chimera.

Designer babies, it appears, go too far for many, but, unlike human/animal hybrids, are not “offensive to public morality” as it’s perceived by the USPTO.