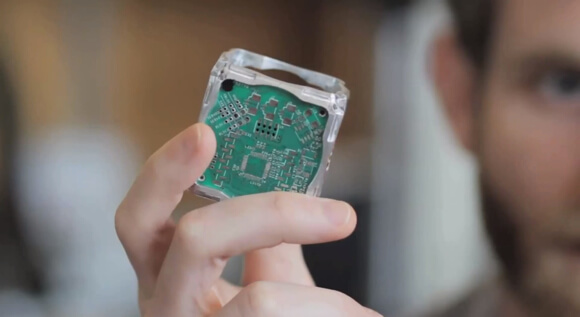 What if robots could reassemble themselves at will? The liquid metal cyborg in Terminator was terrifyingly useful. It could look like anyone, repair shotgun blasts, even turn its hand into a murderous icepick. And then of course, you’ve got Transformers, wherein alien robots morph from cars and trucks into giant humanoid fighting machines.

It isn’t liquid metal nor is it extraterrestrial, but MIT’s John Romanishin, Daniela Rus, and Kyle Gilpin think they’ve found a promising precursor to a similar technology.

By building simple, independent modules that can separate and recombine at will, you can design a robot of flexible functionality. Such modular robots have been around for a long time. Indeed, we’ve covered plenty in the past. But none are as simple as MIT’s M-Blocks, and it’s that simplicity that’s got folks excited.

The first thing you’ll notice about M-Blocks is how they move. All locomotion is self-contained—there are no external moving parts. Each block contains a 20,000 RPM flywheel which imparts angular momentum to each cube. They can move across the floor, roll over each other, and even leap about like a Mexican jumping bean.

The result is a system of discrete components capable of joining together to form a shape and then breaking apart and reassembling into another shape.

M-Blocks are distinct from other modular robots because, instead of being in control throughout the assembly process, there are moments of chaos, where the blocks’ location isn’t precisely regulated. That would be a problem for self-assembling robots that require certain external components to match up perfectly to unite.

What makes this chaos acceptable in M-Blocks? Magnets. When they are close to one another, the magnets on the cubes’ edges passively align their poles and straighten the cube, allowing the face magnets to snap together.

Because there is no special orientation required—for connectors to meet up, for example—any side will do.

These edge magnets also allow the cubes to pivot around each other. Because the magnets are chamfered, the magnets touch when they pivot, and the bond is strengthened.

In the future, the team envisions equipping special blocks with more horsepower to pull weaker blocks along or battery packs for extra juice. Eventually, some blocks might carry cameras, lights, or grippers to maneuver objects or handle tools. At the current scale, the team thinks advanced versions of M-Blocks might be used to repair infrastructure, build and reconfigure scaffolding, or assemble furniture or heavy equipment.

But it’s taking the design smaller that really sparks the imagination.

Reduced to nanoscale, swarms of M-Blocks might become the voxels of self-assembling macro-bots. The smaller the block—the higher the robot’s voxel resolution. Or made compatible with human biology, they could be used to attack tumors or repair organs.

M-Blocks make such dreams ever so slightly more realistic because of their simplicity. The simpler the constituent parts, the cheaper and easier they are to make, control, and miniaturize. Complexity can arise in how they come together and in which configurations—not unlike cells in living things.

But of course, all that’s a long, uncertain way off, and technology has a way of surprising even our dearest held dreams. These early prototypes aren’t autonomous, and they are only capable of forming shapes, not functioning tools or infrastructure.

For now, the team is focused on improving their design. They’re building 100 new M-Blocks for further experimentation. Whereas the current blocks are individually controlled by their handlers, the new blocks have enough processing power onboard to do some things autonomously. The team is also working on new software to control them.

Ideally, a human using M-Blocks would give a general instruction to form a particular shape, and the blocks would figure out how to do it on their own.

Romanishin told MIT news, “We want hundreds of cubes, scattered randomly across the floor, to be able to identify each other, coalesce, and autonomously transform into a chair, or a ladder, or a desk, on demand.”