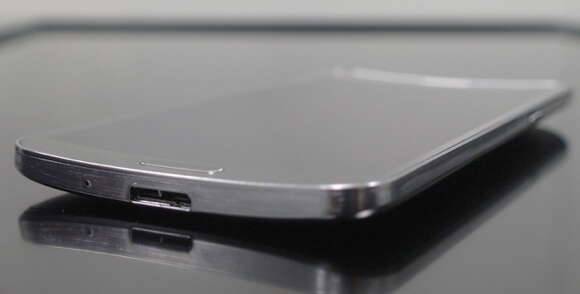 We very recently wrote Samsung was promising a phone with a curved display in the coming months. Ask and ye shall receive. The electronics behemoth released the details of a curved smartphone called the Galaxy Round—and if you live in Korea, you’re in luck. That’s the only place the firm is offering the Round.

The phone’s specs are mostly on par with the Galaxy 4, making the curved display its salient trait. Samsung says the phone fits your hand better, and there are a few special features, like a roll-activated status bar and roll-controlled music track selection.

Some will pay the price for a device that looks different, but there’s little must-have about a curved phone. The encouraging message may be that Samsung is still gunning for fully flexible phones. The Round’s curved profile is made possible by Samsung’s Super Amoled flexible display, and they’ve been teasing flexible phones for a few years now. But absent flexible components, the tech is taking longer to develop than expected.

Likely Samsung is selling the Round only in Korea because they know it isn’t a blockbuster—so, why release it at all? Because they can.

Instead of building hype through secrecy and perfecting a new design, Samsung throws everything at the wall to see what sticks. They like to draw attention to the fact they’re ahead of the curve. And that part of the plan is panning out beautifully. The below 18 second video of the Round’s roll feature logged four million views in three days.

As for those flexible phones that bend and stretch and fold into your pocket? New materials, like graphene, or flexible lithium-ion batteries may one day make flexible components that match flexible displays. But it appears we’ll have to wait a little longer.