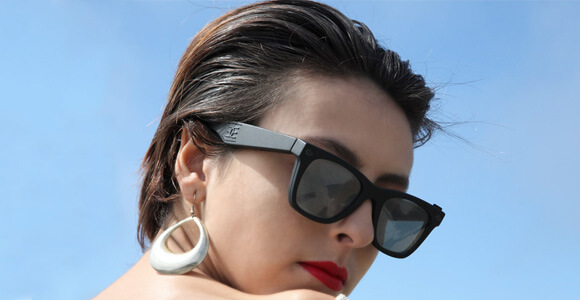 Google Glass has generated a lot of buzz, but the eyeglass-mounted, touch- and voice-operated computer is still not available to the general public. And while Google has hyped and beta-tested, competing “point-of-view” devices have begun to emerge. With competitors’ approaches ranging from conventional eyeglasses with an embedded video camera to goggles that allow users to manipulate three-dimensional holograms in the air, POV computing is becoming a crowded and diverse field in which Glass will have to compete.

Competitors have emerged targeting every perceived weak spot in Glass. Think it’s too geeky looking? Try Epiphany Eyewear, conventional glasses that include up to 32 GB of storage and a button-activated HD video camera.

You can’t wear Google Glass if you need prescription lenses, some have grumbled. Epiphany can accommodate most prescriptions, and the device uses its electronic components to become sunglasses on command. They are available for pre-order starting at $299.

Zeyez is also pre-selling normal-looking eyeglasses that record video and sound and support prescription lenses. The device can store up to 8 GB of data and can stream directly to Facebook.

Others have alleged that Glass’s geekiness would be fine if only the eyewear had more functionality than calling, texting, searching and receiving Google Now notifications. In order to do more, some would-be competitors have turned to bulkier products.

Vusix smart glasses and GlassUp offer a kind of hacked solution: Both deliver all of a smartphone’s content to a lightweight device worn on the face, but the smartphone must remain nearby. GlassUp evokes light sports or work goggles. Vusix’s device looks like a Bluetooth earpiece with an eyepiece extension. Unlike GlassUp, which is read-only, Vusix includes the sensors one would normally find in a smartphone, and allows the user to edit content by touching or speaking to the device. GlassUp will sell for $299; no price has been announced for Vusix smart glasses, but the company expects to start sales by the end of the year.

Meta SpaceGlasses hopes to go well beyond Google Glass — which product manager Matt Kitchales called “a notification machine” — without backup from a smartphone. (The glasses need to sync with the user’s Mac or Windows computer.)

Meta’s glasses push into the realm of augmented reality, projecting 3D holograms that the user controls by touching them in the air. (Voice recognition will likely come soon.) The device is currently optimized for gaming; when it goes on sale this April, it will ship with primarily gaming apps loaded.

But with a $667 estimated price tag, compared to Glass’s $1500, Kitchales indicated that SpaceGlasses would appeal to average consumers in the long run. The first generation will also include an app that operates a keyboard hologram, for example. And the promotional video shows a user plopping an object into a 3D printer, sending the command and specs in the process.

But SpaceGlasses will likely end up focusing on enterprise use cases, analysts said. Design, medical and mechanical applications are already on the radar, according to Kitchales.

At the moment, the glasses are simply too cumbersome with too little battery life to make a play for average users, Jonathan Gaw, an IDC analyst who specializes in wearable technology, told Singularity Hub.

“Can you imagine walking down the street in them?”, he asked rhetorically.

Meta insists the consumer edition will be much sleeker than the prototypes it has shown off, but all-day use is the bar for popular consumer items, as ubiquitous Apple products have shown.

Angela McIntyre, research director at Gartner, also thinks SpaceGlasses will likely find their niche in games or in industries such as insurance adjustment and mechanical repair.

“The primary value add that they’re focusing on is augmented reality. It’s good, but you also need to have all the content to go with it, so it will take a while to build up the ecosystem. It sounds good for games, but it seems like maybe there are simpler ways to say an object should go into the 3D printer,” McIntyre told Singularity Hub.

Industries have many compelling use cases for such devices, the analysts said. Mechanics could receive instructions with arrows marking the actual part to be manipulated, she said. And if they still can’t figure out how to fix a particularly difficult problem, they could send video to an expert at headquarters and receive real-time feedback.

Vusix also markets an augmented reality system which is equally clunky and doesn’t have any of its own apps.

The dork factor is a real problem, the analysts said, at least until POV eyewear finds a killer app that drives not just geeks but style leaders to wear them.

All of the companies mentioned above — and others — are hoping to find that killer app. The margins in the hardware business are razor-thin, and whether companies settle upon an SaaS model for enterprise or use hardware to hook users in to their consumer software or online services, software is the name of the game.

And that’s where Google still seems to have a commanding lead in the consumer market, Gaw said. By open-sourcing Glass and Android, the company has cultivated relationships with so many developers that one of them is likely to hit upon the killer app that appeals to average users.

The only question is: By the time that happens, will an even lighter form factor have come along to displace POV eyewear?