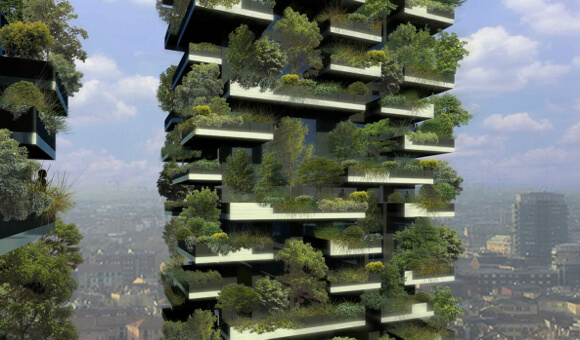 Denizens of Milan, Italy will have a brand new 2.5 acre forest smack in the middle of their city by the end of 2013. You might think that’s a city with its priorities straight. But this particular forest didn’t require the sacrifice of precious commercial real estate—because it’s of the vertical variety.

Each terrace is specially designed and engineered to support a small community of trees, shrubs, and other greenery.

When complete, Bosco Verticale will house 730 trees from three to six meters (10 to 20 feet) in height and irrigated primarily by the buildings’ grey water—runoff from baths, sinks, washing machines, and dishwashers. 5,000 shrubs and 11,000 plants will keep the trees company. A true forest.

Milan is the second biggest city in Italy and one of the most polluted in Europe. Bosco Verticale, an “anti-sprawl measure,” is intended to set a new course for the fashion capital. Vertical green spaces expand biodiversity without expanding city limits.

Trees and other green things filter dust and carbon dioxide and breathe out fresh oxygen. They’ll also produce humidity and shield residents from city noise. Along with all that, of course, they’ll bring a touch of nature into central Milan.

Perhaps the coolest thing about Bosco Verticale is it isn’t just an intriguing concept on paper. The €65 million project (about a 5% premium on traditional costs) is slated to be finished this year. Already, construction on the buildings is complete, and workers have begun lifting the first trees into place with cranes. 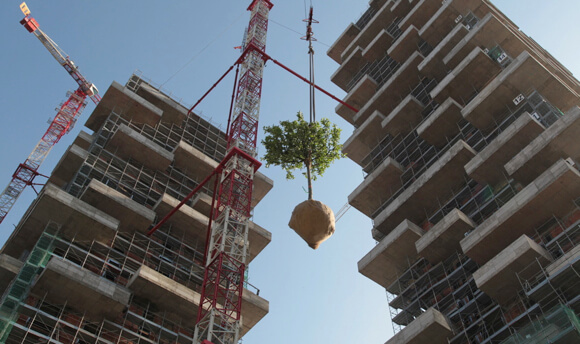 Bosco Verticale may be a proof of concept for more such buildings in Milan or elsewhere in the future. But already there are other similarly upright projects afoot that may bring more of the countryside into future cities.

Last year we wrote about a vertical farm in Singapore. Dubbed A-Gro-Gro and built by the company, Sky Green, the stacks growing veggies on nine meter aluminum towers. The towers use hydraulics to rotate their plants in the sun and run on a mere light bulb’s worth of energy per day.

So far, Sky Green’s veggies are limited and tend to cost more than the competition, but folks are buying, and the firm plans to double their towers from 120 to 300 and quadruple production from half a ton to two tons this year.

As for Bosco Verticale, although it’s almost complete, whether the project proves a success story will be borne out in the coming years. As you’d expect, planting trees on apartment buildings presents a few unique engineering challenges.

Laura Gatti, the landscape consultant on Bosco Verticale, said it’s lucky Milan isn’t a terribly windy place. (Perhaps, the design wouldn’t work in Chicago.) They tested the forces acting on the trees, the building, and the trees on the building in a wind tunnel. These calculations helped determine the right tree dimensions.

Further, engineers had to calculate the weight of the trees, containers, and soil and appropriately reinforce the concrete terraces. Each tree container is lined with a waterproof membrane, a root barrier, and a polypropilene grid to avoid leakage and keep roots away from walls.

Ultimately, the only way to fully vet the design is in practice. But if all goes to plan, tenants will soon retire to their apartments after a long day in the grit and grime and drift off to the sound of wind in the leaves—and muffled car horns.