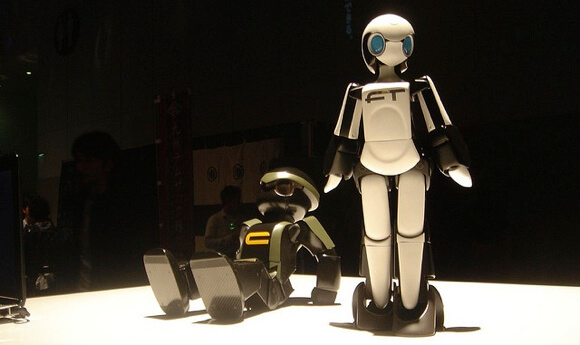 Investing in emerging technologies can be a risky endeavor. Of the hundreds or thousands of “revolutionary” ideas out there, a significant fraction will fail. For most of us, it’s probably wisest to cheer from the sidelines.

But Frank Tobe, founder and editor of the Robot Report, wanted to get in on the action without getting too caught up in the details of every company he owned—that is, he wanted to diversify by investing in the robotics market as a whole.

In a recent blog post, he said, “As I set about learning about the industry and those involved, I called my stock broker and asked for a basket of robotics-related stocks that I could invest in for my retirement. He gave me two—which I thought curious.”

After a second opinion from another broker and a call to Bloomberg, a comprehensive source of financial information, Tobe found a list of robotics companies simply didn’t exist. So, he created one, started a new company, and made it into a stock index.

He also licensed an exchange traded fund to track the index and launched it on Nasdaq under the stock ticker ROBO. Whereas Tobe had to put in a lot of work to engineer his portfolio of robot stocks—the rest of us can now buy ROBO.

An exchange traded fund like ROBO can be bought and sold like a stock, but the fund itself is designed to track a specific index’s performance. Did the S&P 500 gain or lose 9% last month? The ETF tracking it should have performed much the same. Though ETFs are traded like stocks, investors usually still pay a management fee. Fees vary by ETF.

Exchange traded funds can follow broad indexes like the S&P 500, which is considered a proxy for the US stock market, or the MSCI World, which is the global equivalent of the S&P 500—or niche indexes, like small cap companies in China.

ROBO is somewhere in between. Robotics itself is still a rather modest market segment. That is, if you want a low-risk portfolio, you wouldn’t dedicate a large fraction solely to robotics. But if you think robotics is poised to go big time, and you don’t want to miss it entirely, ROBO is a diversified way to get involved.

And whether you want to invest or not, the index itself provides an interesting glimpse into the robotics industry landscape.

Tobe told Singularity Hub that “pure-play robotics companies” like iRobot, for example, are rare. So the index looks across industries to find its firms.

Currently, over half the companies belong to the Industrials sector and another 30% are classified Information Technology. The rest are in the Consumer Discretionary, Health Care, and Energy sectors.

Of the included firms, you’ve probably heard of Intuitive Surgical, iRobot, Mitsubishi, Foxconn, and Northrop Grumman. Not all the companies specialize in robotics alone, but robotics makes up a significant portion of their business. Other storied companies, like Boston Dynamics, don’t appear as they aren’t publicly traded.

“In general, the newer robotic technology companies have not yet gone public (or been acquired by public companies),” Tobe said, “Thus, the index is slightly biased to established companies in the industry.”

The US and Japan have the most companies in the index, with 28 and 19 respectively. But by region, it’s almost evenly divided between North America, Asia, and Europe. Israel’s Elbit Systems is the lone Middle Eastern firm.

Like any index, the constituent companies are subject to change as the industry evolves. And the robotics industry is moving fast.

Among current trends Tobe thinks notable, industrial robots, once the sole domain of giant manufacturers, are increasingly being used by small- and mid-sized companies to assist human workers. And in recent years, robotic medical procedures have been growing 40% annually, reducing hospital time and complications. Professional and domestic service robots and robotic toys are growing 20% annually, he told us.

As of the end of the third quarter, the ROBO-STOX index (total return) has averaged about 20% annually over the last decade and was up almost 50% in the last year. Those are some pretty impressive gains. (Although as the standard financial disclaimer goes, past performance is no guarantee of future results.)

What’s driving such torrid growth? Sensors, processors, and batteries are getting better and cheaper. “Five years ago, Willow Garage built their PR2 robots at a cost of $240-400,000,” Tobe told us, “Today the same team of builders, working from a new start-up, are building a $35,000 robot with more capabilities and dramatically lowered costs.”

It remains to be seen whether investors will pile into Tobe’s robotics exchange traded fund. But as a recent commenter on Tobe’s site said, “What a coincidence. I was looking for a robotics ETF today, and you created it yesterday.”

All charts and graphs courtesy of ROBO-STOX, LLC