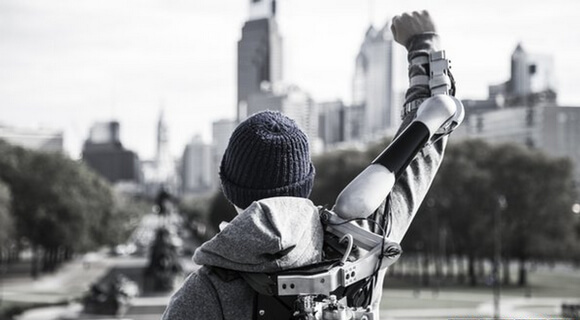 Exoskeletons are fusing man and machine to reduce workplace injuries and restore freedom to the disabled or infirm—but they have yet to escape the lab, and worse, only a few folks could realistically afford one even if they did.

A group of University of Pennsylvania students hope their Titan Arm exoskeleton, winner of the 2013 James Dyson Award, might change that.

“Current exoskeletons are prohibitively expensive at more than $100,000,” the team notes, “Using lean principles, we created Titan for less than $2,000.”

Titan Arm is an untethered aluminum exoskeleton powered by a wearable battery pack. It fits over one arm and is controlled by a joystick, a motor in the back, and a cable threaded through a pulley at the elbow joint.

When wearing the Titan Arm users are endowed with super strength—in this case, the ability to lift 40 pounds more than usual.

Exoskeletons like Titan Arm may help workers who regularly lift heavy loads avoid injury. And because Titan Arm is equipped with sensors beaming motion and force data to external devices, it may aid doctors and patients in rehabilitation.

The students plan to refine their design with the prize money ($45,000), 3D print strategic parts, and open source Titan Arm’s plans to the research and maker community. Eventually, they hope to sell a commercial version for less than $10,000.

A University of Tokyo design uses pneumatic tubes to mimic muscles, and in contrast to Titan Arm, fits over both arms. However, unlike Titan Arm, it’s tethered for power, and both exoskeletons lack lower body support.

Although exoskeletons may show up in warehouses and other industrial settings in the future, it seems likely they’ll largely give way to fully automated solutions. That is, manual labor robots will continue to remove humans from the equation.

The wider application in disabled populations, meanwhile, requires lower prices to drive adoption. An economical exoskeleton like Titan Arm is a step in the right direction.