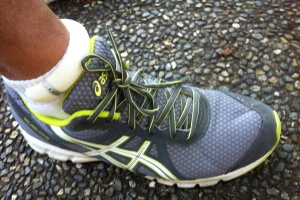 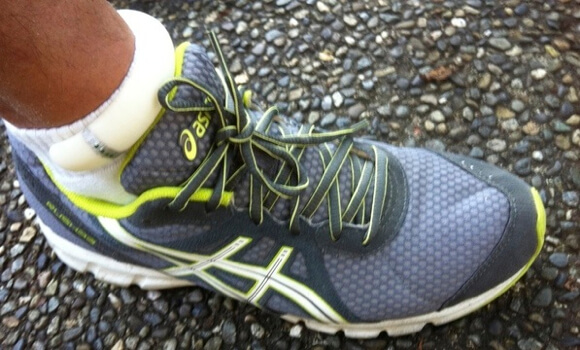 The first wave of self-tracking devices—Fitbit, FuelBand, Basis Band—has washed ashore and perhaps receded somewhat. Even so, sports and activity trackers make up some 61% of the wearables market, and market watchers predict more growth.

Most of these new health monitors strap to your wrist to record heart rate and activity. But Heapsylon’s Sensoria smart socks are a little different and may provide a clue to which way the wind blows—in the near future, more fitness trackers and health sensors may be embedded in clothing or attached to the skin. Here’s how they work. 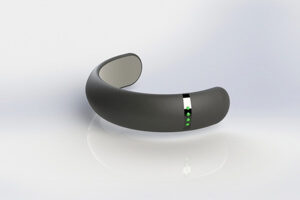 The company affixes textile sensors to each stocking, fore and aft. These sensors record foot pressure, heart rate, and body temperature and relay the data to a horseshoe-shaped device magnetically attached to the sock’s cuff, snug as Jeordie La Forge’s visor.

The socks are more accurate step trackers than the wrist-worn type that rely solely on accelerometers. But even better, if you’re a runner—Heapsylon’s initial target market—the socks’ pressure data are arranged inside a foot diagram in an accompanying app to show your average foot strike.

Running experts say the mid-foot strike is best, but it’s difficult for most runners to track their form. Though estimates vary, a significant fraction of runners will suffer a running-related injury each year, and while other factors may contribute to injuries, poor form is an important factor. 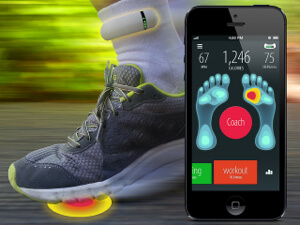 Other key running data include stride length and cadence. A digital “coach” in the app will let runners know when their stride length is too long or short and help them maintain a consistent pace by counting out step rhythm.

Heapsylon says their socks are comfortable and can be washed regularly. In extensive run testing, the ankle device didn’t slip down or prove much of a distraction. A LAPTOP Magazine review said the socks were comfortable, but they were only able to test a prototype anklet.

Future applications could range beyond running to other balance and stance dependent sports like golf, baseball, snowboarding, or skiing. Heapsylon says they’ll release a developer toolkit to expand their product’s capabilities.

Though the firm’s Indiegogo campaign is finished, they are taking pre-orders for shipment next year. Folks can buy the socks, anklet, and app for $149. Additional socks can be purchased in three-packs for $59.

Earlier this year, Gartner forecast wearable electronics would be a $10 billion market by 2016. Credit Suisse, meanwhile, said the market would increase ten-fold over the next three to five years to $50 billion. Neither forecast assigned a dominant fraction of the market to the kind of wearable tech you strap on your wrist or head.

Most wearable electronics won’t be conspicuous; rather, they’ll blend into the background, sewn into clothes or affixed to skin. And while watches, glasses, and the like will appeal to some—wearable “quantified self” sensors will be better integrated invisibly, coordinated by the more powerful, battery-hungry smartphone in your pocket.

Heapsylon has their eye on that larger market. If they can successfully design for socks—which get stomped on thousands of times a day and regularly thrown in the wash—their sensors may work more universally. Ultimately, the firm wants to be “the GoreTex of embeddable computing.”

If Gartner and Credit Suisse are right, Sensoria may be well positioned to provide the smart part of all that intelligent clothing.