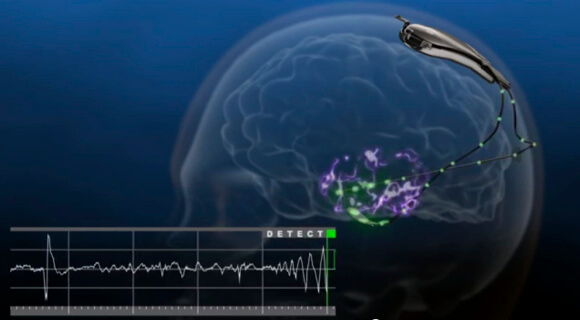 In recent years, brain implants have been used to control tremors from Parkinson’s Disease and help quadriplegics move robotic arms. We can now add epilepsy to the list—a brain implant for patients suffering epileptic seizures was recently approved by the US Food and Drug Administration (FDA).

Epilepsy is caused by a kind of electrical storm in the brain that temporarily shorts out the system. Often, such events are associated with temporary loss of consciousness and bouts of muscle convulsions (seizures) lasting a minute or two.

The NeuroPace RNS Stimulator is surgically implanted within the skull and connected by wires and electrodes to the regions of the brain thought responsible for the seizures. The neurostimulator actively monitors electrical activity in these regions and autonomously delivers “imperceptible” electrical stimulation to normalize irregularities.

Epilepsy affects an estimated two million Americans and 65 million people worldwide. Even so, it remains a largely mysterious condition. If a person experiences two or more seizures, they are designated epileptic, but often, the root cause goes undiagnosed.

Sometimes a change of diet can aid epilepsy patients, but more often, drug therapies are required. If drugs don’t do the trick, doctors may look into brain surgery to remove the misfiring region. However, sometimes brain surgery isn’t practical because the region responsible is essential to living a normal life.

For patients who don’t respond to epilepsy drugs (see here for specific criteria) the NeuroPace neurostimulator might be an option. NueroPace estimates some 400,000 patients might benefit from their device.

Dr. Joseph Neimat, a Vanderbilt Medical Center neurologist, told NPR, “I think this is substantial. This is the first FDA-approved brain implant for epilepsy. And it’s also the first implant of any kind that is responsive to brain activity.”

A similar technique called vagus nerve stimulation is already available. However, the method doesn’t proactively seek irregularities and respond to them.

Though the RNS Stimulator helped reduce the seizures patients experienced, it only rarely removed them entirely.

Though neurostimulators help mitigate symptoms, they don’t cure the underlying condition. And brain surgery is serious, no matter how you slice it. The FDA said site infection was one of the most frequent adverse effects of the RNS Stimulator.

That said, simply reducing symptoms can be transformative.

We recently wrote about Andrew Johnson, who had a neurostimulator implanted in his brain to control violent tremors brought on by Parkinson’s Disease.

Like the NeuroPace device, Johnson’s device is only appropriate for some patients, and surgery can be rough. Johnson said post-procedure, he was in “obscene amounts of pain” where the “slightest whisper was like a dagger to the skull.”

Once in place, however the implant dramatically improved Johnson’s quality of life—essentially giving him an off-switch for a once debilitating condition.