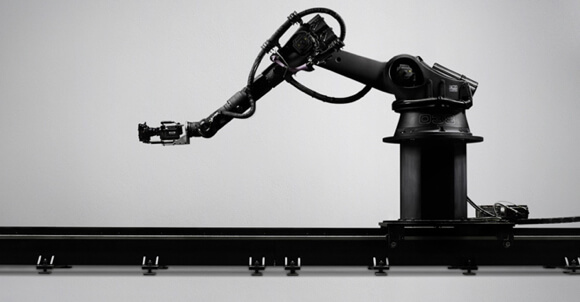 Last year, I visited a warehouse behind a typically fashionable San Francisco café where two startups, Bot & Dolly and Autofuss, were busy making the insanely immersive visuals for the film Gravity (among a host of other projects) using naught but assembly line robots, clever software, and high-def cameras.

A few months later, I found myself in another warehouse—this time some forty minutes south of the city—where robotic arms, built and programmed by Industrial Perception, used advanced computer vision to sort toys and throw around boxes.

What do these companies have in common?

According to the New York Times, they were just secretly acquired by Google—along with four other robotics firms over the last six months—to design and build a fleet of next-generation robots under the direction of Andy Rubin, the former chief of Google’s mobile operating system, Android.

Though it’s early yet, the NYT says Google hopes to further automate manufacturing and industrial settings, and judging by the three companies I’ve visited, that sounds about right.

Industrial Perception’s robots, for example, use computer vision to better understand what they’re looking at and handle non-standard situations, like when unloading a pallet of irregular boxes. Industrial Perception CEO, Troy Straszheim, told me robots using his firm’s software are already employed to autonomously unload trucks, “You point it at a trailer full of boxes and it will unload it, unsupervised.”

During my visit, co-founder, Jeff Linnell, showed off one of their robots fastidiously stacking sticks into a five foot curvilinear wall—no adhesives, just robotic precision and focus. Or see the tech for yourself in the film, Gravity. Those immersive low-g action sequences wouldn’t have happened without robots.

Google hopes to combine their powers with future acquisitions and the search giant’s financial backing and experience to take robotics to the next level.

Today’s assembly line robots are programmed to perform a single task over and over again, and they’ve been doing it for years. But when it comes to switching gears to do a different task or adapting to an uncontrolled environment—forget about it.

Advanced computer vision and easily programmable robots, for example, could make industrial robots more flexible and autonomous, and they’ll be able to take over more tasks that currently require humans. Which is exactly what Google’s after.

Google CEO, Larry Page, has said as much in the past. Technology, as he sees it, ought to relieve humans of repetitive, laborious tasks, freeing us to be creative, innovate, think, or take our leisure.

How close are we to commercially available Google-bots?

Rubin, who stepped down from Android earlier this year, says he’d pondered going back to robotics for years but was only recently convinced technologies were ready to make such a venture pay off.

Though some hardware problems have been solved, like mobility and moving hands and arms, additional breakthroughs in sensors and software are needed. Although it isn’t officially part of Google’s secret tech shop, Google X, the firm similarly classifies its efforts in robotics as a moonshot.

Rubin told the NYT, “Like any moonshot, you have to think of time as a factor. We need enough runway and a 10-year vision.”

But should Google build robots at all? Or might it not be better for a “Google” of robotics to grow up all on its own? Merging seven or more robotics companies on one team may work beautifully. But mergers can be messy. Cultures clash and politics can replace productivity. Diversity breeds innovation, and monoculture tends to kill it.

Google appears painfully aware of the tendency for vaunted tech titans to gather rust rather faster than expected. With the likes of Google X and this recent foray into robotics, the firm seems intent on breeding a culture of risk-taking to avoid the inevitable.

And to be fair, they’ve shown themselves capable of absorbing an established hardware company, Motorola, infusing it with the Google spirit, and successfully producing a popular product, the Moto X smartphone.

It’ll be fascinating to look back at this period a decade from now—either a prime example of a big corporation grasping at straws or the birth of a new generation of technologies, à la AT&T’s Bell Labs.