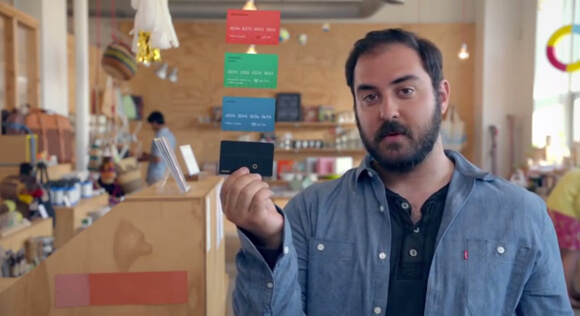 Coin is a matte black, rectangular piece of plastic. It’s about the size and shape of a credit card, maybe a little thicker, and like a credit card has a magnetic strip. Unlike a credit card, coin carries a chip, sports a small digital display, and is a financial shape shifter—it can become any of eight stored credit cards with a button flick.

Coin comes with the card, a smartphone magstripe reader, and an organizational app. You take a picture of the card, swipe it, and decide which cards go on Coin in the app. Coin holds eight cards at a time, but you can enter as many as you like into the app.

To differentiate between cards, Coin displays the last four digits of each card, its expiration date, and the security code. Users simply scroll until they see the card they want—and Bob’s your uncle, swipe Coin just like any other credit card.

It works anywhere you’d use a credit card. You can even use it to pull cash from the ATM.  And because it’s paired with your phone, when the two are apart, Coin pings you. If it’s away from your phone too long Coin locks itself. 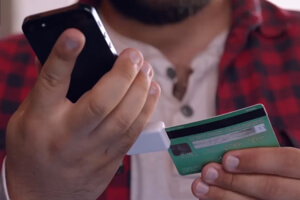 Seems like a convenient, innovative idea, right? You bet. It might be a huge success. But post-launch, questions poured in, most notably about security.

Folks worried “putting all your eggs in one basket” would allow thieves to skim not just one card at a time, but all of them, or grab all your credit card info by simply hacking your smartphone.

Along the same lines, if the card stops or malfunctions or your phone runs out of batteries (and drops contact with Coin) you won’t have access to back-up cards.

Others worried that Coin’s cards wouldn’t be usable for long because they aren’t compatible with next-generation card protocols (called EMV) for cards that carry microchips instead of mag strips.

EMV credit cards are widely available globally, and while they haven’t been adopted in the US yet, they may be in the coming years.

Noting the product is but six months old, Coin’s scrambling to address concerns. “One of the things we wanted from our launch was feedback … but we didn’t expect so much,” CEO and founder, Kanishk Parashar, told CNNMoney.

Coin is as vulnerable to magstripe skimmers as other cards, but the app is password protected and 128 bit/256 bit encrypted. In its Q&A, Coin says first-generation cards won’t be EMV-compatible but future iterations will be.

That may be the case, but Robert Graham, CEO of Atlanta’s Errata Security skeptically notes, “That’s not possible. By definition, [EMV] chips cannot be cloned. That’s the entire reason for chips rather than magstripes.” 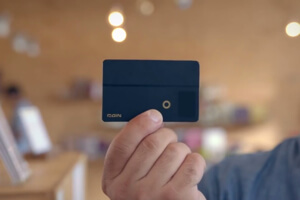 Beyond security, Coin may not dramatically slim everyone’s wallet. If you regularly use a business card, multiple personal cards, and a debit card—consolidating them all with Coin will feel great. But sometimes it already makes sense to carry only one card, say your debit card, for daily use.

Coin works on membership cards too, but other wallet expanders include IDs and public transportation passes. A truly universal card would combine all these. Some tech gurus think a solution might eventually be mobile payments on smartphones. But such solutions have been slow to catch on.

Coin’s simpler goal may make it a more viable alternative in the short run. Google would, for example, to do away with your wallet entirely—Coin just wants to slim it down a bit. Coin doesn’t require a wholesale change in consumer and vender behavior to work. It fits neatly in the current system but improves on it.

That Coin blew past its $50,000 funding goal in 40 minutes shows there’s demand for such a product. The question is whether Coin will appeal to an audience beyond early adopters and technophiles, successfully navigate security concerns, obtain the backing of big credit card companies, and stay current with changing card technologies.