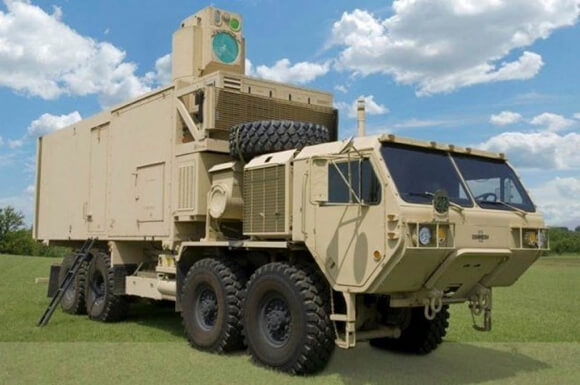 After three weeks of testing at New Mexico’s White Sands Missile Range, the US Army recently reported they’d successfully engaged over 90 mortars and drones with—a giant laser mounted on top of a truck.

The 10 kW Boeing-built laser focuses the equivalent of about 100 light bulbs into a coin-sized beam to rapidly heat and destroy targets midair.

The Army’s program manager on the project, Terry Bauer, told The Christian Science Monitor, “[The target] basically falls where it was going to fall, but it doesn’t explode when it hits the ground. We turn it into a rock, basically.”

In some situations, lasers would be a huge improvement on current defense strategies which use expensive missiles to shoot down incoming ordnance.

Israel’s Iron Dome missile defense system, for example, launches $40,000 missiles to take out $1,000 rockets. The Army laser, meanwhile, costs about a “cup of diesel fuel” per shot and, traveling at the speed of light, hits its target almost instantaneously.

However, because the device can only engage one target at a time, and its destructive effect takes a few seconds, the faster the laser does its job, the better.

Testing will, therefore, continue through 2022 with 50 kW and 100 kW lasers capable of more quickly destroying targets or engaging them at greater distances. The system will also need to prove effective in fog and rain during planned trials in Florida next year.

That this particular laser is truck-mounted and mobile is novel, but the laser tech itself is old hat. We’ve covered various demonstrations of military grade lasers over the years.

Germany’s Rheinmetall Defense, for example, combines two beams (30 kW and 20 kW) to form a single 50 kW ray capable of cutting through a half inch of steel a kilometer away and destroying a drone at a half kilometer.

Or recalling Archimedes’ legendary (and much debated) ancient death ray, the Navy used a laser to set a test ship afire after cutting through its outboard motor. The Navy has since trained its lasers on airborne threats like drones.