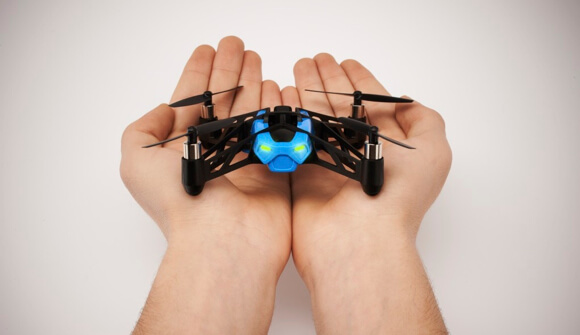 When you hear drone, you may think of the army or Amazon. But a robot flyer can be just plain fun too, right? Parrot aims to bring drones to the mainstream market with the new MiniDrone—a scaled down, easier-to-fly version of their AR.Drone. Added to their new Jumping Sumo two-wheeler? High-tech good times.

Parrot’s drone for your home is tiny, fitting into the palm of the hand, zippy, and stable. Two removable wheels on protect the drone’s propellers from obstructions, allow it to roll around for optimal take-off location—and lend it a bit of the TIE fighter look.

Users send it flying around the room with naught but a mobile device and app. The drone’s onboard computer uses miniature sensors like a camera, ultrasonic sensor, and gyroscope to handle complex stabilization, leaving higher level maneuvers to the human pilot, and reducing the likelihood they’ll lose control of the drone.

The bigger Parrot AR.Drone 2.0 carries a camera and boasts 18 minutes of battery life,* while the MiniDrone’s only camera is used solely for navigation, and the battery life is a mere six minutes. The MiniDrone, however, should be easier to fly and, though no price has yet been set, will likely cost less than the A.R.Drone 2.0’s $299.

Parrot revealed MiniDrone at CES 2014, along with another toy, Jumping Sumo. Jumping Sumo rolls around on two big independently controlled wheels for quick cornering and can pop into the air or onto surfaces.

The little two-wheeler is ambidextrous. No matter which side it lands on, it keeps on driving. A camera produces a point-of-view video feed.

Jumping Sumo’s battery life clocks in at slightly more comfortable 20 minutes. Both toys are linked to mobile devices by Bluetooth and have a range of 160 feet.

MiniDrone and Jumping Sumo are the latest in a growing market of toys with computer-enabled navigation onboard. Last year, for example, we covered Anki Drive. On the surface, Anki Drive is a simple car racing game. Under the hood, it’s an amalgam of advanced artificial intelligence, mobile computing, and robotics.

Like the algorithms that effortlessly keep Anki Drive’s cars on the track, MiniDrone is easy to fly because the hardest part of flying is handled by an tiny onboard computer. You can crash it into walls or knock it with your hand, and the drone easily regains its balance, hovering as before, unperturbed.

The toy trend is a trend to watch—even if you could care less about toys. Toys have two prime requirements: ease of use and low cost. That artificial intelligence and robotics, once costly and complicated, are now showing up in toys heralds a wider revolution.

Anki and Parrot are just two examples of how exponentially growing computing power and declining cost are bringing AI and robotics into the everyday.