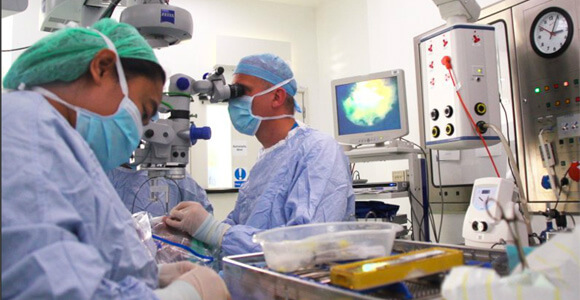 With few treatments available and clear genetic causes, progressive blindness has been the focus of several types of gene therapy. But doctors have previously balked at injecting therapeutic genes behind the patient’s retina, for fear of damaging the light-sensing tissue.

In a recent Oxford trial reported in The Lancet, doctors restored sight to patients with choroideremia, a rare inherited cause of blindness that affects about 1 in 50,000 people, with a surgery that involved temporarily detaching the retina to inject mutation-free genes behind it.

Of nine patients who underwent the experimental procedure, the two with the most impaired vision could read 2 – 4 additional lines on an eye chart six months later. Four patients whose eyesight was less impaired had their night vision improve after treatment. Since the results were recorded, all have continued to improve.

Patient Jonathan Wyatt, 65, described it this way: “Now when I watch a football match on the TV, if I look at the screen with my left eye alone, it is as if someone has switched on the floodlights. The green of the pitch is brighter, and the numbers on the shirts are much clearer.” Wyatt’s left eye, previously worse than his right, was treated in the trial.

The choroideremia treatment used a harmless virus to carry an un-mutated version of the CHM gene that causes the disease into the retina after being injected behind it. Patients received the therapy in just one eye to ensure that they didn’t lose all sight while allowing the clinicians to use the other eye as a point of comparison.

“The results showing improvement in vision in the first six patients confirm that the virus can deliver its DNA payload without causing significant damage to the retina. This has huge implications for anyone with a genetic retinal disease such as age-related macular degeneration or retinitis pigmentosa, because it has for the first time shown that gene therapy can be applied safely before the onset of vision loss,” said the lead researcher, Oxford University ophthalmologist Robert McLaren. 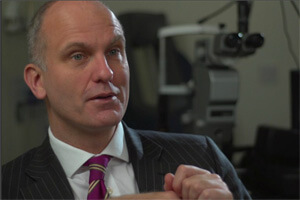 “It is still too early to know if the gene therapy treatment will last indefinitely, but we can say that the vision improvements have been maintained for as long as we have been following up the patients, which is two years in one case,” McLaren said.

Gene therapy has also been used with some success to treat other forms of congenital eye disease, notably Leber’s congenital amaurosis, but more common conditions, including macular degeneration and retinitis pigmentosa, have proven more difficult to treat. University of California at Berkeley researchers used a virus, rather than surgery, to push past the retina and deliver normal genetic material. A computerized eye implant is also available to circumvent the impacts of retinitis pigmentosa.