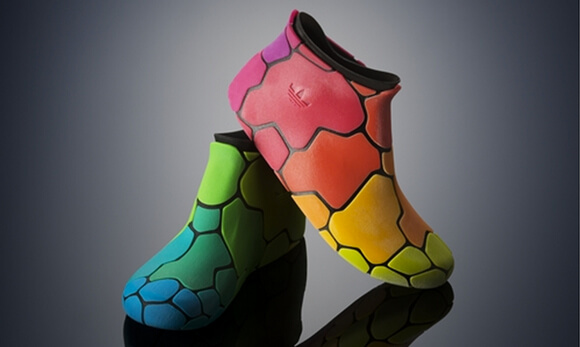 An industrial 3D printer hums to life at bicycle maker, Trek. The designers are prototyping a new hand grip of soft rubber layered over a core of hard plastic.

Traditionally, the print job would require the designers to swap print nozzles and materials or compromise the design to speed the process. However, Trek is employing the multi-material, full color Stratasys Objet500 Connex3 3D printer. And their new grip can go from design to printed prototype in a single step.

Instead of using pre-fabricated materials—and therefore requiring them to be switched mid-run—the Connex line of printers makes materials on the go. Like a painter mixing primary colors to form a varied palette, the Connex3 blends three bases to realize different materials properties.

Users can dial up properties from hard plastic to soft rubber, from opaque to transparent. Even better, the parts are saturated in color by blending cyan, magenta, yellow, and black (CMYK). Users choose from 10 palettes, each containing 45 to 46 individual colors.

To be clear, items printed by the Connex3 aren’t finished products—they’re intended to help the design process by “looking and feeling” like production parts. The printer simply makes the design process more efficient and less wasteful.

And while the Connex3 isn’t the first multi-material 3D printer—the entire Connex line can do this—by adding a significant number of color and materials options, it takes the quality and detail of what can be 3D printed to a new level.

No matter how much potential 3D printers have, they can sometimes still appear limited. But especially in manufacturing and design settings, that is less and less the case.

The Connex3 is $300,000, a good $298,000 more than your regular Joe will spend on a 3D printer. But the tech started in factories and is only now bleeding into the commercial market. Given a little time, desktop 3D printers may well offer full color and varying materials too.

And in the meantime, 3D printers, in combination with other computer guided processes, like multi-axis machining, will continue to quietly revolutionize industrial prototyping and manufacturing.

Gartner estimates enterprise spending will account for 80% of all 3D printer spending in 2014 and total spending will increase year-over-year by some 62% to $669 million.

“The 3D printer market has reached its inflection point,” says Pete Basiliere, research director at Gartner. “While still a nascent market, with hype outpacing the technical realities, the speed of development and rise in buyer interest are pressing hardware, software and service providers to offer easier-to-use tools and materials that produce consistently high-quality results.”

As for the consumer market? Gartner notes demand is still primarily from makers and hobbyists. But thanks to increasingly user friendly software and early adopters generally pushing the envelope of what 3D printers can do, less savvy consumers will enter the market soon as well.

“We expect that a compelling consumer application—something that can only be created at home on a 3D printer—will hit the scene by 2016.”