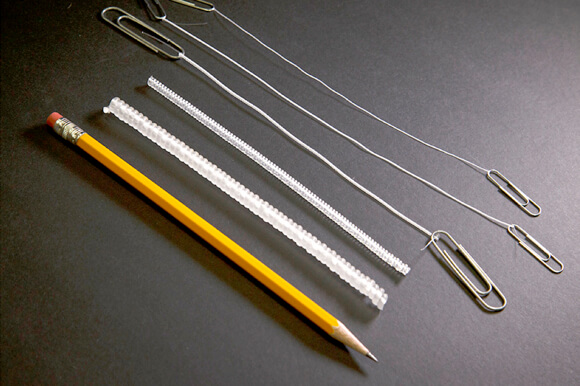 We tend to dream of a future enabled by miraculous materials—nanoscale honeycomb lattices of strong, ultralight superconducting metals. Carbon nanotubes and graphene come to mind. Fishing line and sewing thread? Not so much.

But recent research out of the University of Texas and Australia’s University of Wollongong shows futuristic inventions can be rooted in the mundane. By twisting fishing line and thread like a rubber band, the scientists produced artificial muscle 100 times stronger than human muscle.

Geoff Spinks, the lead Australian researcher, said, “After nearly two decades developing exotic materials as artificial muscles, we have now discovered that the best performing systems can be made from ordinary, everyday fishing line.”

The team heat treated the coils of fishing line so they’d maintain their twist. When subjected to a temperature change, either by heating it directly or running an electric current through it, the “muscle” contracts 49% along its length (compared to some 20% for a human muscle), expands 67% and, to scale, can do work equivalent to a jet engine.

The scientists believe such artificial muscles might be used in exoskeletons and prosthetics, selectively breathable clothing, automated environmental control systems, and humanoid robots.

Current artificial muscles in robots tend to be hydraulically powered. Creations out of epic robotics firm, Boston Dynamics, move jerkily and are either tethered to a power source or run on noisy, gas-powered internal combustion engines. As an alternative to hydraulics, the University of Tokyo built an upper body exoskeleton whose muscles do work by expanding and contracting rubber bladders (pneumatic muscles) with air.

Neither solution is ideal—the former lacking flexibility and requiring significant power and the latter lacking durability.

The twisted polymer muscles, however, are flexible, tough, and naturally store potential energy like rubber bands. They can undergo millions of cycles before appreciably degrading. Further, because the finest filaments are only a little wider than a human hair, they can be scaled down to perform fine motor skills—in a humanoid robot’s facial expressions, for example—or combined for more powerful uses.

Beyond pure robotics, they might be used in exoskeletons for the disabled or soldiers and factory workers carrying heavy loads.

The team also wove textiles out of the material. Clothes made in this manner might respond to changes in temperature, to selectively keep heat in or optimize breathability. And temperature-sensitive windows might regulate a greenhouse environment, automatically opening or closing throughout the day.

All that said, we wonder whether the muscles’ prime strength, sensitivity to temperature changes, might be a weakness too. While automatic contraction and expansion might be useful in a greenhouse, it would be problematic in a robot where changes in temperature, inside and outside the robot’s body, might lead to unwanted movements.

Perhaps ambient temperature changes can be easily counteracted with a steady, base current through the muscle.

In any case, there’s very little holding back further experimentation—the ingredients are readily available, easily manufactured, and cheap. And there’s just something immensely satisfying about the fact materials one can find at home and hack together in a garage might be repurposed for such high-tech applications.