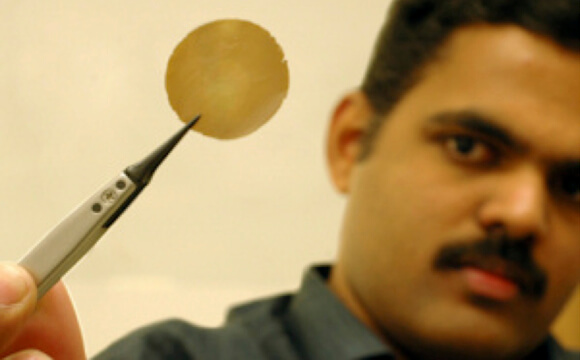 Humans live on a water world, and yet, many of us still struggle to slake our thirst. Why is that? Earth’s oceans are salty. Just 2.5% of the Earth’s water is freshwater, and of that, 60% is trapped in glaciers, 30% in groundwater (not all of which is accessible), and just 10% is on the surface in lakes and rivers.

There is, of course, great demand for freshwater, and it isn’t all for drinking. Freshwater is used for industrial and agricultural purposes too. Because current methods for removing the salt from ocean water (desalination) are energy intensive and expensive—there is increasing competition for a limited supply of freshwater.

Figuring out how to efficiently remove salt from Earth’s oceans would provide a nearly inexhaustible source of our most precious resource—and wouldn’t you know it? The super material graphene may offer a solution.

Graphene, a one-atom-thick carbon wafer, has been hyped in recent years for its laundry list of useful properties—superconductivity, supercapacitance, and super strength, for example.

Its lattice of carbon atoms, akin to chicken wire with nanoscale gaps, allows water through and almost nothing else. Having noted this property, researchers have begun investigating the viability of water filters of graphene.

Desalination plants either use heat to evaporate and re-condense water or force it through a filter (reverse osmosis). The former is obviously energy intensive, but the latter requires large amounts of energy to create pressure and isn’t terribly efficient either. Lockheed’s filter potentially reduces the pressure and therefore energy needed for the process.

“[Perforene is] 500 times thinner than the best filter on the market today and a thousand times stronger,” Lockheed’s John Stetson said. “The energy that’s required and the pressure that’s required to filter salt is approximately 100 times less.”

But as useful as graphene is, there’s currently no cheap, scalable industrial process to make the material. Indeed, Lockheed’s graphene filter has yet to hit the market.

While graphene isn’t ready, a derivative of graphene may be closer.

A University of Manchester research team, led by Dr. Rahul Nair and Professor Andre Geim, recently published a paper in the journal Science describing their experimentation with a water filter made of graphene oxide.

Graphene oxide, as it turns out, has excellent water filtration properties similar to graphene but is cheaper and easier to produce.

The University of Manchester scientists say when stacked into a laminate, graphene oxide forms narrow capillaries that “vigorously suck in water” and block particles bigger than a billionth of a meter. Filters made of graphene oxide wafers, according to the researchers, are as speedy as a coffee filter.

Though in their current form the filters wouldn’t completely desalinate seawater—the finest salt would still get through—the researchers believe this is a temporary obstacle, and they’ll be able to better control the size of the mesh down the line.

“Our ultimate goal is to make a filter device that allows a glass of drinkable water made from seawater after a few minutes of hand pumping,” Dr. Irina Grigorieva said, “We are not there yet but this is no longer science fiction.”

Though the discovery is still in the research phase and Grigorieva is describing personal desalination, if graphene oxide proves efficient as billed, it may be put to work in large-scale desalination too. And that’s an exciting thought—a potentially cheap, efficient way to tap the world’s oceans.