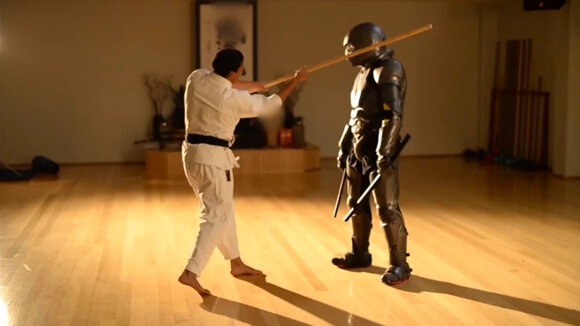 Chiron Global’s martial arts armor has been described as Iron Man-like. We’d say it’s more of a cross between the Dark Knight and Darth Vader. But hey, splitting hairs. Technology, superheroes, ninjas—you get the point.

The Sydney startup spent the last two years designing a prototype suit of armor that is strong, light, flexible, and packed with sensors. Combatants can fight at full speed, and the suit’s plates register a hit’s location and force, all of which is sent wirelessly to a computer scoring the bout and tracking hypothetical damage.

How exactly does the armor work? What’s it made of? What sensors does it use? The firm’s not telling. That information, they say, is proprietary. And no word yet on cost either. But never fear, whatever the enabling tech, the suit speaks for itself in action.

Chiron may eventually sell the armor for martial arts, law enforcement, and even military training—but first they plan to set up a competitive combat league called Unified Weapons Master (UWM).

Chiron CEO, David Pysden, says of the 300+ distinct martial arts styles around the world, 96 are weapons-based. These are rarely practiced in full combat situations for fear of causing severe injury, and as a result, Pysden says they are being lost. UWM is all about “preserving, honoring and reigniting weapons martial arts.”

The sport would pit weaponized martial arts masters against each in a televised event. Hits would be tallied and scored, of course, but because the armor also registers force and damage, if a blow would have been a knockout—or even kill—the bout ends. Another format might dole out competitors multiple lives, à la the video game world.

In the future, we imagine similar suits might even go a step further. If the computer deems a blow hard enough to break an arm, it might freeze the arm and shoulder joints, or if a blow to the head would knock you out or kill you, the entire suit freezes. Yeah. Like Ender’s Game. (How many sci-fi references are too many in one article?)

Though the suit is still a prototype, a few friendly critiques occurred to us watching the videos (check all the videos out here). The joints are less protected to maintain mobility but may be vulnerable to accidental full-force blows. Also, the suit must be like fighting in a mobile sauna—we imagine breathability is a central design concern.

Still, the armor’s potential uses in training amateur, professional, and even military fighters seem pretty clear. Whether a bloodless bloodsport will catch on as entertainment? It’s intriguing, but no lock.