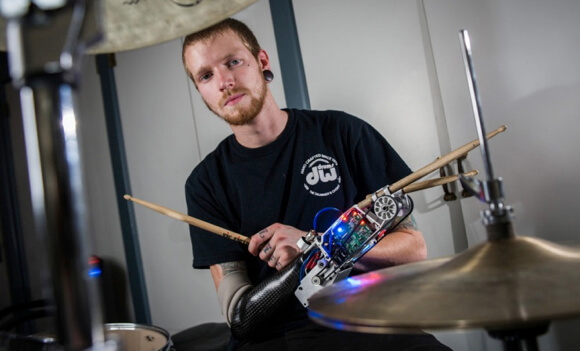 It was the summer of 1987. I, in my hypercolor t-shirt, nibbled astronaut ice cream to an endless parade of MTV hair bands dispensing bar-closing mainstays like “Livin’ On a Prayer,” “Here I Go Again,” and “Pour Some Sugar on Me.”

Those were the days of Bonjovi, Poison, and Whitesnake. But among the mushrooming pantheon of glam gods, Def Leppard had something no one else could touch. The band’s drummer, Rick Allen, played with one arm.

Allen had lost his left arm in a 1984 car crash, and though little could be done to replace the limb, by tweaking his drum kit, he was able to continue on with just one arm—touring (to this day) and laying down the drums for 1987’s hit album Hysteria.

Though Allen’s comeback was inspiring, it also exemplified how prosthetics were more for looks than utility. A quarter of a century on, we still don’t have fully functional replacement limbs. But we do have an amputee-cyborg drummer who’s not only playing again—he’s playing with two arms and even has a few superhuman tricks to boot.

Jason Barnes lost the lower part of his arm after being electrocuted two years ago. The amputation wasn’t as severe as Allen’s—no existing prosthetic we know of could fully restore an upper arm amputee’s abilities—but it still presented a serious challenge, even after Barnes built his own prosthesis following the accident.

The problem with that early replacement? Control, power, dexterity, all these things were gone. Barnes couldn’t bounce the stick or control its speed. So, while he was back in front of his kit, he wasn’t back to playing the drums. Not fully at at least.

That’s where Georgia Tech’s Gil Weinberg comes in. Weinberg builds musical robots. His robots not only know how to play, they know how to jam. Listening to what another musician is playing, they can improvise around it. (For more on robots making music, check out our recent article on Squarepusher’s new robot band.)

As Barnes plays, he positions the prosthesis with his upper arm and controls the first of the two drum sticks by selectively flexing muscles where the prothesis connects to the end of his upper arm. Using an approach called electromyography, the surrogate arm senses these muscular twitches and drives the stick’s cadence and rebound.

The other stick has a mind of its own. Using Weinberg’s machine learning algorithms, perfected for his other musical robots, the second stick listens to what Barnes is playing and lays down a complementary beat. While the stick itself is autonomous, Barnes gets to choose when to use it. He can pull the stick up when he doesn’t want the extra rhythm.

Weinberg thinks such cyborg tech may be just as attractive for able bodied users. Folks might use an “embedded, mechanical third arm” and machine learning algorithms to perform intricate tasks from the operating room to outer space.

And maybe he’s right. The bio-mechanical techniques for controlling such devices are steadily improving. We’ve often written about other futuristic prostheses as they creep toward full functionality and commercial markets.

The Rehabilitation Institute of Chicago’s prosthetic legs and arms, for example, are essentially thought-controlled, using a technique called targeted muscle reinnervation (TMR) to read electrical signals from healthy nerve endings and translate them into actions in the prostheses.

More recently, Case Western’s prosthetic hands established a two-way link—taking direction from the brain and sending sensory information back to it via healthy nerves in the amputee’s residual limb. In one recent case, a research participant showed how powerful the technique is by dexterously plucking stems from cherries.

Improved dexterity and control combined with machine-like abilities may make for a new generation of multi-tasking musicians—disabled or able bodied, it’ll make no difference.