Prosthetic Hand With Sense of Touch Picks Stems From Cherries 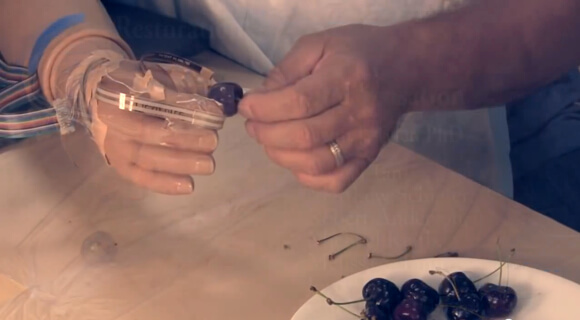 Igor Spetic lost his hand on the job three years ago to an industrial hammer. But like Luke Skywalker, Spetic’s testing a new bionic hand. And though the hand hasn’t caught up to the tech of faraway galaxies, long ago, it’s closer than you might think.

The hand is capable of taking direction from Spetic’s brain and giving his brain sensation in return. This back and forth communication allows him to perform delicate actions impossible with a traditional prosthetic.

In a recent video (below), Spetic pulls the stems from cherries using touch alone. It’s a delicate procedure—too little pressure and stem and cherry remain intact; too much pressure and the cherry’s crushed.

The researchers fitted Spetic with a blindfold and a pair of headphones to isolate his sense of touch. With the sensations turned off, Spetic damaged or destroyed nine of fifteen cherries. But when the team turned the hand on, Spetic crushed only one.

The prosthetic reads Spetic’s mind by way of nerve bundles attached to muscles in his arm. When he thinks of performing a particular movement, the device detects the nerves firing and takes action, pinching thumb and fingers, for example.

Sensations work in reverse. The hand is equipped with 20 discrete sensory regions. When the sensors in a particular region are stimulated by pressure, the device sends a signal up to the nerve bundles in Spetic’s arm and, from there, to his brain.

Dustin Tyler, a Case Western professor and the project’s leader, says the device can be “tuned” to deliver different sensations—an improvement on previous iterations. According to Spetic, these range from ball bearings to cotton balls, sandpaper, and hair.

One imagines future improvements could include more sensory regions tuned to deliver different sensations depending on what’s being touched.

Zac Vawter climbed Chicago’s Willis Tower on a Rehabilitation of Institute of Chicago prosthetic leg controlled by his thoughts alone. The same group builds similarly advanced prosthetic arms and hands. And Case Western released another video of its prosthetic hand earlier this year.

Much of the research is funded by the US Defense Advanced Research Projects Agency (DARPA) with veterans in mind. But of course, amputees and victims of industrial accidents, like Spetic, also stand to benefit greatly.

The tech will take time to study, perfect, and eventually mass produce. But hopefully, in coming years, advanced prosthetics will be affordable and widely available. No doubt, for those who’ve lost a hand, arm, or leg—such technology can’t get here fast enough.