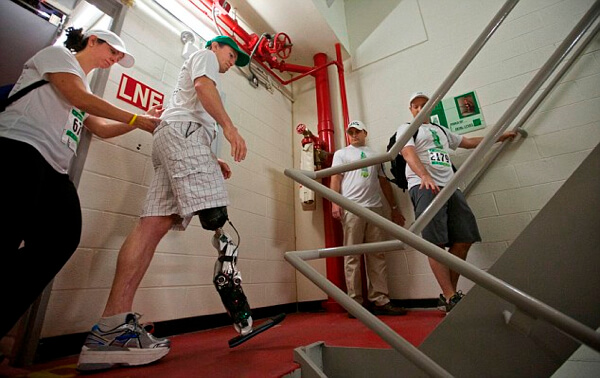 On November 4, Zac Vawter climbed 2,100 steps to the top of Chicago’s Willis Tower. Vawter made the climb on a prosthetic leg. Neither of these facts would be particularly notable but for one small item. Vawter controlled his prosthetic in much the way he would have controlled his old leg—by brain power.

In short, the patient thinks about moving his limb, and presto, it moves.

We should note here—TMR isn’t new. The procedure was introduced as early as 2003 and has been used with upper-arm amputees for years. Singularity Hub covered RIC’s thought-controlled prosthetic arms back in 2009.

Thought-controlled bionic legs, on the other hand, didn’t exist until RIC began work on them three and a half years ago. And just a year and a half ago, patients were still working with a virtual prosthetic.

Still, Dr. Levi Hargrove asserted, “I anticipate that we’ll be able to be walking within the safety of our lab within the next year. As soon as we’re comfortable in our walking then we’ll start going to more complex activities such as stair-climbing and stair-descent.”

Turns out Hargrove was on the money.

Vawter underwent TMR surgery in 2009 and later trained with RIC rehab specialists and researchers to participate in RIC’s annual SkyRise Chicago fundraiser—ultimately, putting the leg to the test publicly.

Here’s a peek at Vawter and his bionic leg in action:

The way RIC’s bionic leg works is fairly intuitive. Amputees have a bunch of nerve endings no longer leading anywhere but still connected to all the right spots in the brain. In other words, thoughts (conscious or not) control when these nerves fire.

Electrodes detect electrical impulses in the reinnervated muscles at the site of the amputation, send the pattern to a computer, the computer recognizes the pattern (say, “lift leg” pattern), and executes a learned response (“bend knee”).

What’s cool about TMR is it is largely non-invasive. The patient undergoes surgical re-assignment of the nerve endings—but there is no brain implant required, as one sees in other brain-controlled systems. And as they’ve developed the software, the number of electrodes needed to perform complex functions has declined.

Zac Vawter made it up 2,100 stairs in under an hour, and he made it look pretty darn natural. But that’s not the end of the research. His efforts are part of an ongoing five year study to send the prosthetic to clinical trials, and hopefully, full commercial use. 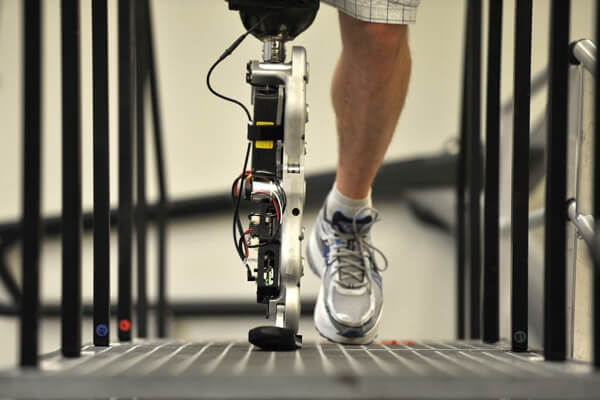 What’s next? Undoubtedly, researchers and subjects will continue to refine the hardware and software. But there’s another interesting outcome of the research.

It turns out that the nerve endings still work in two directions—taking orders from the brain and sending back sensory input. Some patients report feeling in the residual image of their old limb (phantom limb) when innervated nerves are stimulated.

The phenomenon is still being studied, but it’s thought that one day the prosthetic could stimulate the nerves to communicate simple sensations such as heat and pressure. If done properly, the patient’s brain may assign these sensations to the appropriate part of the bionic limb (finger, toe, knee, elbow).

The technology may be advancing, but costs are still astronomical. Vawter’s stair-stepping apparatus sports a price tag of $8 million. And unless, they participate in a trial like Vawter, the average amputee won’t be able to even try a bionic prosthetic for a while—full commercial use is still some ten years away.

Even so, bionic limbs are giving some people back a bit of the humanity that went missing when they lost their arm or leg. And for those not lucky enough to be included in early trials, maybe a little hope that eventually a bionic arm or leg won’t be much more expensive or difficult to procure than traditional prosthetics—and vastly more empowering.