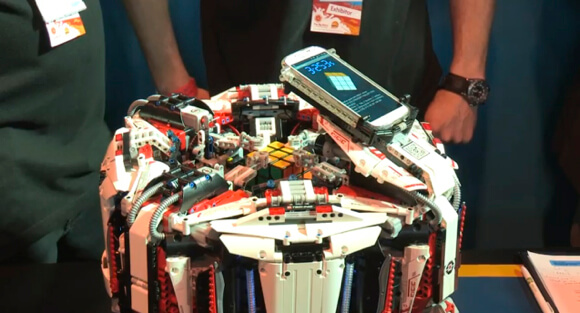 Speedcuber Mats Valk still owns the human record at a mindblowing 5.55 seconds. But he was bested by Gilday and Dobson’s Cubestormer 2 robot’s 5.35 seconds (later improved to 5.27) in 2011. Since then, it’s been all Cubestormer.

Perched atop a stationary set of Lego motors, arms, and actuators, a Samsung Galaxy S4 smartphone gazes into a hollow space wherein sits a Rubik’s cube. The robot uses the smartphone’s camera to view the cube’s color configuration and a special app computes the optimal solution and instructs the arms how to move.

In case you aren’t versed in cube-lore, the puzzle hasn’t changed, but cube quality has improved to accommodate competitions. Cubestormer 3 uses a speed cube that’s ultrafast but a touch finicky. It allows twists when the sides aren’t fully aligned, and that requires a high degree of precision to avoid jamming the cube.

Gilday explains, “The robot is effectively mirroring the same kind of judgment and dexterity that a human speed cuber has to apply.” And the pair add, whereas human competitors get to study the cube before the clock starts, the robot isn’t allowed the luxury—its time includes studying, computing, and solving the cube.

We’ve written about the Cubestormer robots since 2010, when grandpa Cubestormer first started posting fast times. The next in line, Cubestormer II, was the bot that officially beat the human record. Cubestormer II was fast, no doubt, but you can see in the video, it never hits the top gear achieved by Cubestormer 3.

Isn’t this all a touch frivolous? Sure. It’s just a game. But so are chess and Jeopardy. It’s not the game that matters, but the skills required to play at a human level.

Beyond executing a series of algorithms—which is what computers do best—Cubestormer’s visual abilities, seeing, and making sense of the real world, and physical abilities, dexterously arranging sides at top speed, are impressive.

And Cubestormer isn’t a multi-million dollar machine. When Deep Blue defeated Garry Kasparov at chess, it was one of the world’s most powerful computers, and it couldn’t see the board or move the chess pieces. Cubestormer 3 sees, analyzes, solves, and executes better than a human—using a pocket-sized smartphone and Lego parts.