The Dutch Are 3D Printing a House 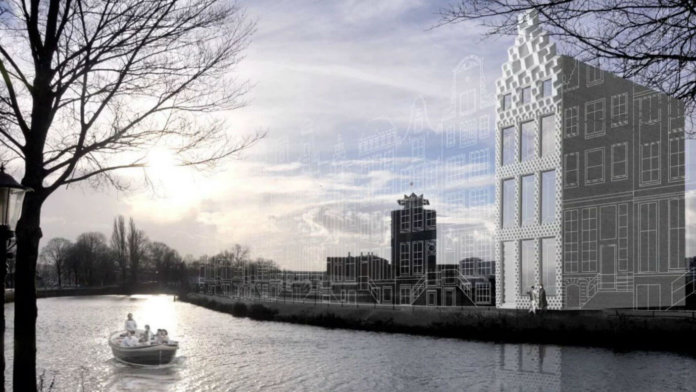 My first article here at Singularity Hub was on a plan to 3D print houses in under 24 hours. What on the surface appeared to be an exciting new idea was, in fact, an exciting old idea recycled in the press every so often but seemingly stuck in PowerPoint presentations and conceptual sketches.

Practically, a fully 3D printed house has been just over the horizon for years but (to my knowledge) none had begun construction until now.

The Dutch design firm, Dus Architects, recently announced that using their giant KamerMaker 3D printer, work is finally underway on a 3D printed canal house in Amsterdam. The house won’t be printed in a single piece but room by room. And no one’s promising exceptional speed—the hope is to finish three years from now.

Each of the house’s 13 rooms will be printed separately and assembled on site. The 3D printing process will combine the traditionally separate elements of inner and outer façade, ornamentation, and structure. The printer will leave space for key infrastructural elements like pipes and wiring. Concrete will provide insulation and structural support.

In the first three weeks of work, Dus Architects and the KamerMaker printed a three-meter high, 180 kilogram piece of the house using bio-plastic made of plant oils and microfibers. It’s not exactly high resolution. The Guardian charitably described the product as “intriguingly handmade” before calling it bunches of lumpy black spaghetti.

But it’s not supposed to be perfect. Not yet at least. The Dus Architect team says the project is an experiment to learn what methods and materials work best. The lower floors will be less refined than the upper, and future structures might move more quickly and look more beautiful. 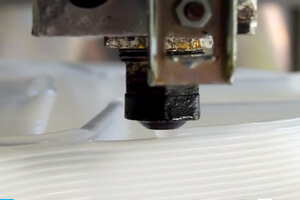 Why pursue 3D printed buildings at all?

Hedwig Heinsman of Dus explains, “With 3D-printing, there is zero waste, reduced transportation costs, and everything can be melted down and recycled. This could revolutionize how we make our cities.”

Dus envisions a future where people might select pre-designed rooms in an online marketplace. They would choose their favorite rooms and combine them into a single digital design file. The architects could refine the design and then simply hit the print button. Such buildings might even be printed, shredded, and printed anew—using the same material.

Others have noted that 3D printers might be used to provide affordable, quickly constructed housing for the urban poor or victims of natural disasters; they can lay down beautiful curvilinear designs, impossible to replicate in any other way; and they may even autonomously raise structures on the Moon or Mars in preparation for humans.

Indeed, this is the vision of USC professor, Behrokh Khoshnevis, an early proponent of 3D printed homes.

Unlike the plastics used by Dus Architect, Khoshnevis’s contour crafting method employs a specially formulated kind of concrete. And instead of printing a home piece by piece, Khoshnevis envisions an industrial 3D printer on tracks printing an entire home in a single run. The process, Khoshnevis estimates, could take less than 24 hours. 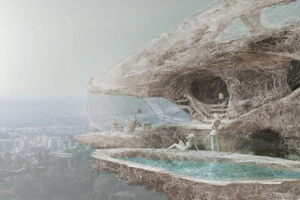 Protohouse was inspired by the porous strength of bones, depositing material only where it is structurally needed to make it economical yet strong.

Janjaap Ruijssenaars of Universe Architecture would use concrete, like Khoshnevis, to print a home shaped like a mobius strip. Unlike Khoshnevis, his design would be printed in parts and assembled on site.

Of these examples (and no doubt there are more), Dus Architecture is the first to get the ball rolling. Where architectural 3D printing will go from here is anyone’s guess.

Heinsman says, “One of my fantasies is printing in biodegradable materials for festivals. You could print an outrageous tent structure, then after a couple of years and few rain showers it disappears.”

3D printing in construction, like in manufacturing, will most likely evolve alongside and augment traditional techniques and methods instead of outright replacing them right away. Even that might make for some original and distinctly modern new architectural forms, and at the very least, a few stunning structures worthy of Burning Man.