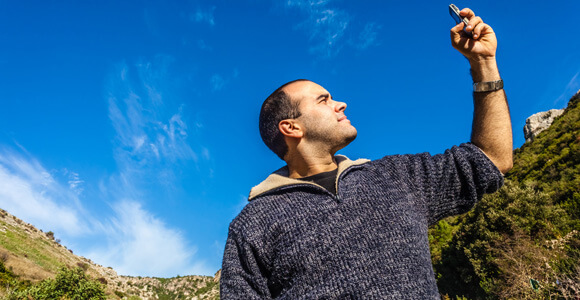 A San Francisco startup called Open Garden has for several years been trying to gain traction for its modest effort to narrow the digital gap — as well as provide uninterrupted connection for the digital haves. It has been pitching an Android app that allows users to share their Wi-Fi connection with others.

Enthusiasm for the app has been dampened by its unfamiliar technology: It uses mesh networking. Rather than routing traffic to and from a few big servers, a mesh network allows devices to communicate directly with one another. Wiring to support this architecture at scale would be prohibitively expensive, but it can work locally, using Bluetooth or Wi-Fi. 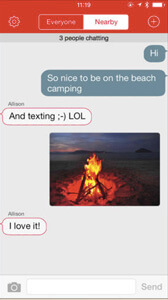 Unbeknownst to most users, Apple introduced a version of mesh networking called Multipeer Connectivity in iOS7. And now Open Garden has a new use for mesh networking that has drummed up more excitement: a chat app that works even when there’s no phone or internet service available.

Open Garden’s new app, called FireChat, has made Apple’s framework more useful by letting messages go from phone A through phone B to phone C if A and C are not physically close enough to establish a connection. In other words, the more users there are, the more geographic ground the network can cover.

It may not yet be the killer app for mesh networking, but the company hopes FireChat will be the one that sparks that app. It will soon launch an SDK, inviting other developers to use the peer-to-peer network to build their own apps.

For the digital haves, FireChat offers little more than a novelty feature: the ability to text even when out of range. (Apple and Android users will have to self-segregate, however, since Apple’s Multipeer framework doesn’t work with Android.) But for users where there are no robust mobile networks or who can’t afford a texting plan, the mesh networking platform offers a chance at connectivity.

Far more modest than the flying internet hubs Facebook and Google are, each in their own way, proposing, mesh networking extends peer-to-peer communication and it works now.

Which brings us to one final benefit of mesh networks: The data, though no more secure than that on an open Wi-Fi network, doesn’t go to a corporate server. That means where users communicate through mesh networks, government spies will have to get physically close to their targets if they want to eavesdrop.