Festo Unleashes a Robotic Kangaroo and a Swarm of Bubble Drones 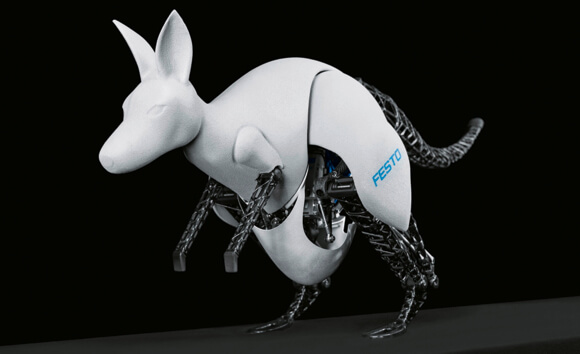 In the world according to robotics firm, Festo, swarms of robojellyfish rule the air and mechanical elephant trunks take care of business on the ground. Festo’s day job is automating factories. On the side, they make cool robots inspired by nature.

Their latest? A robot kangaroo and swarm of bubble drones:

Festo’s robots are usually more interesting than immediately practical, but by focusing on one or two key natural evolutionary traits, they shed light on and offer potential solutions to some of the big challenges in robotics.

Take their robot kangaroo dubbed BionicKangaroo. According to Festo, a kangaroo’s long leg and foot tendons absorb and store energy from one hop to the next, while their tail acts as a counterweight to balance the system. These traits allow roos to efficiently move with both speed and endurance.

Two years in development, BionicKangaroo puts a few of these tricks to the test. The robot’s most obvious biomimetic trait? It looks like a kangaroo. BionicKangaroo stands a meter high and weighs seven kilograms. (A wallaby then?)

The robot drives its pneumatic (air-powered) muscles using either an external compressor or an onboard high-pressure storage tank (Festo developed two options).

Most of BionicKangaroo’s electronics are packed into a tight space in its torso, concentrating its center of gravity, and are powered by a rechargeable lithium battery. Valves supply air and power the servos controlling the legs and tail. A rubber elastic spring mimics a real kangaroo’s powerful Achilles tendon.

Instead of controlling the robot like an RC car—the engineers went with gesture controls. The robot’s pilot directs its movement with a Myo armband from Thalmic Labs (see here for more on Myo). Gesture controls, instead of a flat 2D interface, may prove a more intuitive way to control robots in 3D spaces.

In action, the robot has hops, but it’s evident the kangaroo’s effortless grace on two legs (and tail) is hard to duplicate. Unlike kangaroos, BionicKangaroo uses all four limbs to balance itself in between leaps.

Still, it’s a fine addition to their growing menagerie.

Festo also released video of a swarm of bubble drones (eMotionSpheres) that can fly in formation or randomly without crashing.

The drones use small propellers to move, and a central computer coordinates the swarm using a system of cameras and infrared markers on each drone. The drones autonomously return to charging stations on the ground when they get low on juice.

We imagine art installations using such a system, and Festo suggests more practical applications where “indoor GPS” would be used to track products or coordinate worker robots and vehicles inside a factory.

Matternet is similarly proposing a drone network (presumably with satellite GPS) controlled by a central operating system to deliver goods and medicines to remote rural areas in the developing world. Meanwhile, Amazon and others might use a similar technique for drone deliveries of the retail sort.