Can Elon Musk and SpaceX Take Space Travel From Evolutionary to Revolutionary? 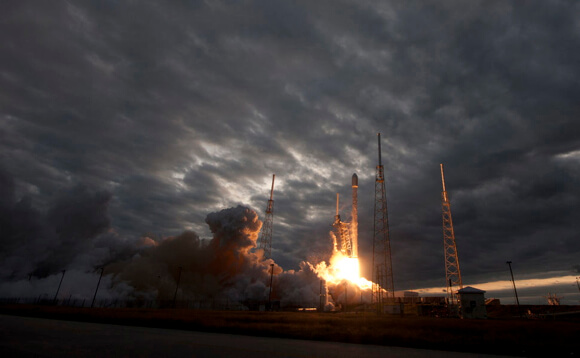 Recently, off the coast of Florida, a 22-story rocket hurtled out of the upper atmosphere, fired its engines, and briefly hovered upright over a stormy Atlantic ocean. The Falcon 9 launch vehicle was built by California space firm, SpaceX, and its progeny may revolutionize space travel—at least, that’s the hope.

Most space launches still run into the hundreds of millions of dollars. The Falcon 9 has already slashed costs to roughly $60 million. But that’s not enough for SpaceX CEO, Elon Musk. Early in the company’s history, Musk made it plain that to radically reduce costs, his firm would have to nail the holy grail—reusable rockets.

“If we become the biggest launch company in the world, making money hand over fist, but we’re still not reusable, I will consider us to have failed.”

He says the firm’s progress to date has been evolutionary, not revolutionary.

The lion’s share of the launch cost goes into the rocket (fuel makes up just 0.3%). And yet, we discard rockets after launch—leaving them to burn up in the atmosphere or crash into the ocean—and start the next launch from scratch. The recent trial off Florida was the latest milestone in SpaceX’s plans to radically reduce costs by recycling rockets.

SpaceX first attempted to recover rockets by using parachutes to slow reentry and descent over the ocean. After a number of failed efforts, the firm set a new course in 2011, pledging to attempt a rocket-powered descent and landing.

The hope then (and now) was to steer both of the Falcon 9’s stages into a controlled landing back on the launch pad—ready and reusable after a brief refurbishment. (Current tests are attempting to retrieve only the rocket’s first stage.)

The first trials began with a scaled down version of the SpaceX Falcon rocket called Grasshopper. Video of Grasshopper trials in Texas showed the craft venturing higher and higher before steering itself back to the pad with pinpoint accuracy.

Then, beginning last September, SpaceX took its first step beyond the Grasshopper program when it deployed its next-generation Falcon 9 (v1.1) rocket. Along with a number of other additions, SpaceX equipped the rocket with navigation software and landing gear (four legs) to test controlled (or soft) landings over the ocean. 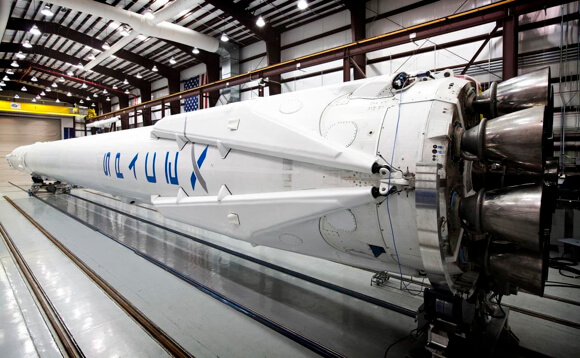 Musk tempered expectations for the first few live tests with the new Falcon, saying he fully expected failure early. And indeed, though the rocket successfully slowed itself in the September flight, its nitrogen thrusters couldn’t prevent a severe spin that starved the engines of fuel and prevented a final firing and soft landing.

Going into the most recent launch, though they’d doubled the thrust of the nitrogen thrusters,  Musk expected a 50% chance of failure. And with a big storm fast approaching, his team couldn’t find a ship sturdy enough to go after the rocket amid 15- to 20-foot swells. They’d have to rely on sensors to gauge success.

Following a series of Tweets after the launch noting all looked well, Musk held a press conference and confirmed the flight was more successful than he’d expected.

The rocket deployed its legs and fired its engines twice, as planned, easing reentry and slowing to a complete stop just above the Atlantic. It was vertical for eight seconds with all systems confirming a healthy condition, before toppling into the water, where Musk believes it was pulverized and sunk by the storm.

Addressing the press, Musk said, “No one has ever soft landed a liquid rocket booster stage before…I think this bodes very well for achieving reusability.” 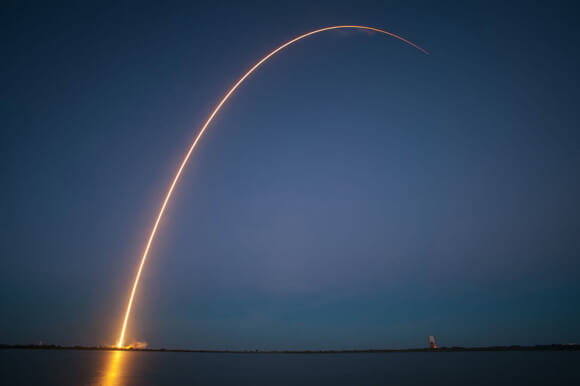 The next test is likely to come a few months from now. The firm plans to have bigger ships, in case of storm, and if all goes to plan, they hope to recover the rocket. Musk estimates several months’ required refurbishment from ocean recovery—but as the firm brings rockets back to the landing pad, they may be ready to go the same day.

If subsequent ocean tests demonstrate sufficient accuracy, the firm may get the green light to bring a rocket back to Cape Canaveral later this year.

Musk estimates they need to demonstrate the ability to land within a mile of their target, but notes they should be able to do much better. Indeed, though they aren’t returning from on high, the Grasshopper trials demonstrated helicopter-like precision, and recent trials with a  Falcon 9R rocket showed similar precision.

Musk says the firm may begin re-flying Falcon rockets as soon as next year (given continued progress), but it will take time to convince clients recycled rockets are a safe way to send precious cargo into orbit—perhaps, for example, they’ll need to make a few demonstration flights with no cargo.

Even if recovery efforts are only successful with the first stage, Musk says they could reduce launch costs up to 70%. Back of the napkin, assuming roughly $60 million per Falcon launch currently—that’s something like $18 million. SpaceX has targeted future Falcon 9 launch costs of $5 to $7 million, which likely includes second stage recovery.

It should be noted, however, that because powered recovery requires extra fuel and weight for the legs, it reduces the amount of cargo each rocket can carry to orbit. Per rocket launch costs are therefore a less accurate indicator than per pound (or kilogram) to orbit launch costs. In any case, Musk still believes savings will be significant.

“There’s the potential for over 100-fold improvement in the cost of access to space.”

Beyond pure cost reduction, Musk has his eye on Mars, where landing ships still presents a tough engineering problem. Because the Martian atmosphere is 100 times thinner than Earth’s, incoming craft are naturally slowed less.

The Mars rover, Curiosity, used atmospheric drag, a giant parachute, and rockets to make it to the surface intact. But Curiosity, weighing in at about a ton, is the limit of current technology. Manned missions, meanwhile, would need to accurately land far more gear on the surface, and a rocket powered descent may be a good solution.

From Earth orbit, to the Moon, to Mars and beyond, the cheaper and more democratic space exploration becomes, the better and faster space-based technology will progress.