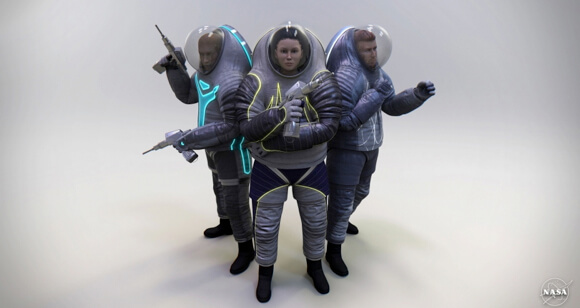 NASA may have decommissioned the Space Shuttle, but it’s not the end of space exploration for the iconic agency which wants to send humans back to the Moon and on to Mars within the next few decades. And they’ll need something to wear up there—something tailored for the next generation of space travel.

The agency first introduced its Z-series prototype spacesuits back in 2012.

The Z-1′s neon green and white design recalled Buzz Lightyear (from Pixar’s animated film Toy Story). Testing included mobility, low-g (on a parabolic flight), and access through the suitport (a backpack-like hatch in the rear).

The line is to be designed for use in space as well on the surface of other planetary bodies (e.g., the Moon or Mars) and will include radiation shielding and improved materials and joint construction to facilitate movement in the bulky, pressurized suits.

Now, a few years on, NASA’s ready to advance their prototype from Z-1 to Z-2. The Z-2 suit includes some 3D-printed hardware and will be the first surface-specific planetary mobility suit to be tested in a full vacuum.

The agency opened three designs (physically the same but aesthetically different) to the voting public. In a landslide, the “Technology” design won 63% of the vote and officially evolves the Z-series from Buzz Lightyear to Tron.