Google Self-Driving Cars Are Learning to Navigate the Urban Jungle 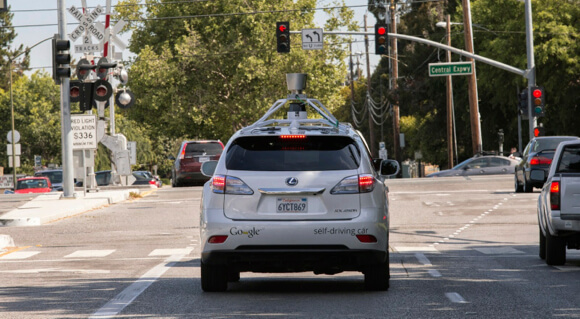 The last update came in 2012 when the fleet hit 300,000 miles on highways. But the goal isn’t to automate just highway miles—Google wants to engineer a door-to-door robot chauffeur. Therefore, doubling the fleet’s logged mileage is less important than the fact that the Google car team says they’re now laser focused on urban driving.

Highway driving is a comparatively simple problem. Speed and spacing is more consistent and cars are usually the only thing on the road. The number of predictable urban obstacles, on the other hand, is long—stop signs, pedestrians, traffic lights, construction zones, etc.—and novel, low-probability situations are very nearly endless.

City driving includes widely varying speeds, frequent lane changes, subtle shifts within the same lane, dodging erratic pedestrians and bikers, communicating with other drivers using gestures or eye contact. Lacking a robot car that can learn and adapt to new situations, Google has to catalogue and code for as much as they can.

In one of the first in-depth glimpses granted the press, Atlantic reporter Eric Jaffe described how Google’s teaching its cars to drive.

They have a human observer in every vehicle. The observer flags and relays incidents to software developers who then review the car’s performance and fine tune the code for better behavior in already programmed instances or write new commands for new situations. That’s a laborious process. And it may never account for every eventuality.

That comment echoes something Tesla CEO Elon Musk said last year. Teslas, he thinks, can be 90% automated by 2016, but that last 10% will be a bear. Even so, increasing complexity included, Urmson says over the years they’ve come to believe their goal of a completely self-driving car is possible.

But when might such a car be available to ordinary folk? Probably not for awhile yet.

A fully formed system will take more experimental work. Further, the Google car relies on detailed maps—maps that don’t yet exist for any city outside Mountain View. Rules and regulations will have to catch up too. And then there’s cost. The Google car’s self-driving hardware costs six figures, including $70,000 for the ungainly rotating lidar atop the cars. 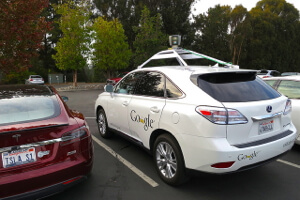 Such obstacles may push self-driving cars down the road, but none are deal breakers. Expect rules and regulations (already underway in several states) to allow robot cars inside the next decade.

Meanwhile, Google’s shown itself capable of vast maps data projects (Google Maps). And emerging technology is usually expensive (and bulky) in the research phase (think mobile phones). First comes functionality then the focus shifts to slimming it down and cutting cost.

When commercial self-driving technology matures, some believe it will turn an unprepared auto industry on its head.

In a recent blog post, Singularity University’s Brad Templeton (and consultant to the Google car team) said, “The past history of high-tech disruptions shows that very few of the incumbent leaders make it through to the other side. If I were one of the car makers who doesn’t even have a serious project on this, I would be very afraid right now.”

Templeton further notes that though Mercedes is furthest along of the major carmakers, its systems are still less capable than the Google car—in 2010.

But why bother with robot cars at all? In part, it’s a matter of productivity. A self-driving car may give you back the average 4% of your life spent commuting. You’ll be free to do other things on the road. Talk, text, or video. Go for it.

But the most often cited benefit is safety. Ormson clearly has those numbers on autodial. Every year, 33,000 people die on US roads, he told Jaffe. Automobile accidents are the leading cause of death for people age 4 to 34. And the kicker, at least 90% of all accidents are due to human error. Given the ability, why wouldn’t we automate?