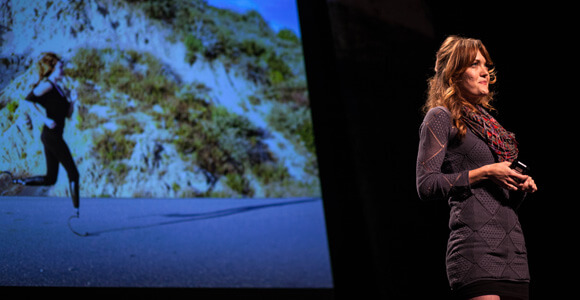 Dancing With the Stars put an out transsexual man on mainstream TV for the first time in 2011, and now the show is breaking ground again by bringing a person with prosthetic limbs into Americans’ living rooms every Monday night.

Amy Purdy, who lost her legs below the knee after a bout with bacterial meningitis and sepsis in 1999, scored two 10s and a 9 this week for a lively dance with Derek Hough performed on blade prosthetics similar to those made famous by the runner Oscar Pistorius.

Though the reality show is likely most Americans’ introduction to Purdy, she has done a lot in her 15 years as a double amputee to challenge conventional notions of disability.

Amy was a snowboarder before her accident and resumed within months of getting her first prostheses. In 2005, she and her partner, Daniel Gale, founded Adaptive Action Sports, a kind of X Games group for people with disabilities.

“Over time we started to see the lines significantly being blurred between disability and ability,” Amy said of the effort in a 2012 Poptech talk. (Purdy has also given a TED talk, but we like this one better.)

Adaptive Action Sports successfully lobbied to have snowboarding admitted to the Paralympic Games this year — and Purdy took bronze.

The conventionally attractive 32 year-old calls herself a “fembot” and jokes that she can adjust her height to suit her romantic partner and her shoe size to maximize deals from the sales rack. Undeniably, her approachable story and her disinterest in concealing her prosthetics has made prostheses less taboo, just as Chaz Bono did for transsexuality.

But Purdy isn’t a cyborg advocate, exactly. She sees disability as an opportunity for people to show what they’re made of, and it’s their grit and innate athletic ability that she referred to when she points to some of the adaptive athletes’ custom made prosthetics, which allow them to demonstrate their “super abilities.”

It’s a correction that many in the tech industry might do well to remember.