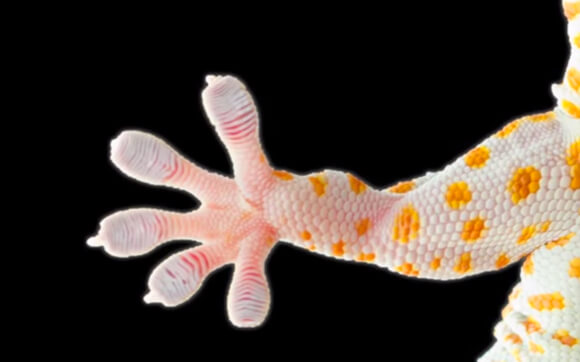 Geckos are the ultimate climbers. Microscopic hairs on their toes enable the lizards to climb just about anything using the molecular attraction (or Van der Waals forces) between their feet and a surface. Although the lizards are firmly stuck to the surface, they can also easily, repeatedly raise and replace their feet to move.

For the past few years, a group at the University of Massachussetts Amherst have been reverse engineering the gecko to make an adhesive called Geckskin. An index-card sized piece of Geckskin supports up to 700 pounds on smooth surfaces (like glass) and can be easily removed, leaving no residue.

Adhesives of similar strength include permanent materials like epoxies. But Geckskin can be applied and reapplied on a variety of surfaces without losing its stickiness.

Given extraordinary capabilities, you might expect Geckskin to be comprised of some new miracle material. Not so. Geckskin is made using readily available, cheap materials—nylon, bathroom caulking, and carbon fibre or cotton, for example.

The project is led by Al Crosby, a materials scientist and engineer, and Duncan Irschick, an integrative biologist and innovator whose gecko research helped reveal the amazing adhesive forces at play in gecko toe-pads. PhD candidates Mike Bartlett and Daniel King helped develop Geckskin and coauthored a 2012 paper on the material.

Irschick told the Guardian, “We aren’t creating a new material that requires some crazy nanotechnology and is going to cost millions to produce. The creation is simple in its conception and profound in the way it’s put together.”

Geckskin has two prime components, a soft pad woven into a stiff fabric backing. The stiff backing is designed to mimic the tendons, which, along with the lizards’ amazing toe-pads, are crucial to their climbing abilities. Because previous attempts at reverse engineering the gecko focused primarily on those microscopic hairs—instead of taking into account the whole package—they proved hard to scale.

When under tension (supporting a weight) Geckskin’s full adhesive strength is applied to the load. However, by removing the weight and flicking the material up, it easily disengages. Unlike tape, of course, it leaves nothing behind and doesn’t lose its stickiness with repeated use. You kind of have to see it to believe it.

Check out this video of the Geckskin guys sticking a monitor to a variety of surfaces.

It’s a cool invention, and maybe you already know exactly how you might use it. But it’s worth discussing a few applications. First and foremost? Hanging stuff.

Flat panel televisions look great on the wall, but they require sizeable, structurally sound screws and a few big holes in your wall. Once mounted, they’re more or less permanent. A television equipped with Geckskin would make the mounting process easy and the moving process easier. And of course, its not just televisions, you could hang pretty much anything heavy without destroying the wall in the process.

Geckskin might also be great material for climbing robots.

Stanford’s gecko-inspired StickyBot, for example, was conceived back in 2006. The robot climbs smooth surfaces using its own special synthetic gecko-like dry adhesive. That is, micro-hairs and Van der Waals forces allow it to climb wood paneling, painted metal, and glass. Carnegie Mellon’s Waalbot works on a similar premise.

But never mind robots, what about humans? Who wouldn’t want a set of Geckskin gloves and shoes? The project, in fact, received funding from DARPA for its Z-Man project to enable soldiers to scale vertical walls in urban warfare without the use of ropes and ladders. The agency explicitly lists geckos and spiders as inspiration for the project.

So then, when can we expect to get a few swatches of Geckskin? Though the team received a flood of inquiries from interested companies after they first announced the product, they say they’re still fine-tuning their creation. Crosby and Irschick think it’ll be at least a year to get a commercial product ready for the market.

Like any new material, taking it from lab to hardware store isn’t a perfectly straight path, and potential doesn’t always translate into a perfect consumer product. Whether Geckskin becomes the new velcro remains to be seen, but in any case, it’s a great example of how nature can drive great engineering.

Irschick says, “Our design for Geckskin shows the true integrative power of evolution for inspiring synthetic design that can ultimately aid humans in many ways.”