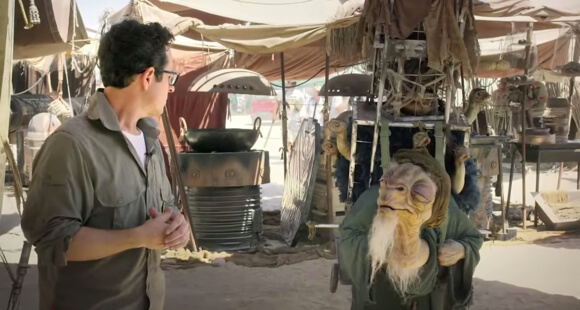 What are the grand challenges? Depends on the galaxy. In unspecified galaxies far, far away and long ago, energy and cheap space travel were no issue. Evil Sith lords suffering from acute megalomania, on the other hand, were a recurrent problem.

For those straddling the two galaxies, a new campaign on Omaze, Star Wars: Force for Change, might be just the opportunity they’ve been waiting for—a chance to be enshrined in the Star Wars universe and to tackle this world’s grand challenges.

JJ Abrams, director of the next Star Wars movie, kicked off the campaign by holographic projection (er, video) from Abu Dhabi. He told fans they’d not only help fund a great cause, UNICEF’s Innovation Labs, but they might win a trip to the London set to meet the stars and make a guest appearance in Star Wars: Episode VII.

Episode VII, to be released next year, advances the saga three decades beyond Return of the Jedi. However, all ties to the past haven’t been severed. The script reportedly focuses on an older Luke, Leia, and Han played by the original actors Harrison Ford, Mark Hamill, and Carrie Fisher.

Various contribution levels are attached to prizes including t-shirts, posters, lightsabers, advanced screenings—even a limited edition bust of Chewbacca. Every $10 contribution will be entered for a chance to win the grand prize.

For Star Wars fans, it’s a golden opportunity to participate in their favorite sci-fi saga. Who wouldn’t want to meet Han Solo, Luke, and Leia and play an alien at a campy dive bar on Tatooine? Meanwhile, like the Jedi, you too can battle the dark side—with your pocketbook and a few inventive tech solutions supported by UNICEF.

Some 90% of the proceeds will be donated to the organization’s Innovation Labs, a program dedicated to finding creative technological solutions to intractable problems facing the world’s children in areas such as nutrition, water, health, and education.

The labs are being set up all over the globe, from Kosovo to Zimbabwe. There’s even a lab at Singularity University headquarters where UNICEF has access to some of the most driven, forward-thinking, and connected individuals in technology.

Projects developed by UNICEF Innovation Labs include an app to help children and families reunite after an emergency, a solar-powered learning kit to provide critical educational opportunities to underprivileged children, and a text message system enabling families to receive infant medical test results twice as fast.

The Force for Change campaign is open until July 18.

Now, the really important question: Is Episode VII going to be any good? If you’re expecting 1977 all over again, it’s time to break out a paper bag and breath deeply. That said, improving on the three prequels released in the 2000s isn’t such a tall task. And JJ Abrams has cred. His revival of Star Trek has been epic (in my opinion).

So, if you’re looking for a way onto the set of Episode VII that doesn’t include Jedi mind tricks; or if you’ve got a place on your mantle just screaming for a bronze Wookiee; or if you’re simply looking for a good cause to contribute to—check out Star Wars: Force for Change on Omaze. Ten bucks just might punch your ticket to Tatooine.