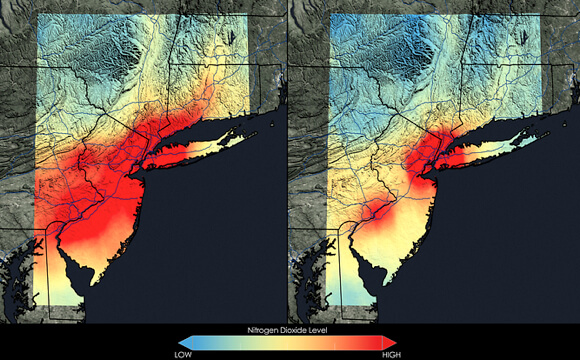 Pollution in US cities has been declining for decades now. But sometimes it takes a visual aid to drive the point home.

NASA recently released a time lapse of nitrogen oxide—one of six federally regulated pollutants—in the US from 2005 to 2011.

Nitrogen oxide is produced by cars and coal power plants, is involved in the creation of other ground-level pollutants including ozone and particulates, and can negatively impact the respiratory system. The images, collected over a six-year period from orbit by the ozone monitoring instrument (OMI) on NASA’s Aura satellite, show nitrogen oxide levels declined nationally, and in some cases dramatically.

Los Angeles, Chicago, and Atlanta, for example, experienced a greater than 40% decrease in nitrogen oxide. Levels of the gas in New York declined over 30%, and levels in Houston, Denver, and Philadelphia fell over 20%.

The images cover a relatively short period, but the trend of declining nitrogen oxide is a long one. The EPA estimates levels of the gas declined -60% nationally between 1980 and 2012. And the trend over the same period holds across other major pollutants on the EPA’s list—levels of lead declined -91%, carbon monoxide fell -83%, sulfur dioxide decreased -78%, and ground-based ozone dropped -25%.

That’s not to say the air is now pristine.

Earth’s atmosphere is complex and global. Whereas pollution is falling in industrialized countries, the opposite is true in developing nations like China and India. And no region is a closed system—that is, changing levels in one will affect the other.

But it’s a hopeful sign that a central driver  has been the invention of technology for cleaner and more efficient energy use in cars and power plants. Technology tends to improve and get cheaper over the years—and once available, it crosses national and ideological divides with relative ease. If it works, it works.

The larger point, however, is that while it may seem many well-publicized problems of development are consistently worsening—this isn’t always the case.