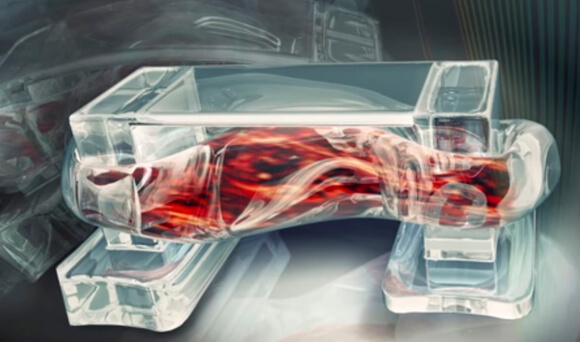 Robots come in all shapes and sizes—some are mechanical, and some aren’t. Last year, a team of scientists from the University of Illinois at Urbana-Champaign made a seven-millimeter-long 3D printed robot powered by the heart cells of a rat.

The device, made of 3D printed hydrogel—a water-based, biologically compatible gel—had two feet, one bigger than the other. The smaller, longer foot was coated in heart cells. Each time the cells contracted, the robot would crawl forward a few millimeters.

3D printing allowed the researchers to quickly fabricate and test new designs. But there was a problem. Because the heart cells beat spontaneously (like in a human heart), they couldn’t control the robot’s motion. So, the scientists designed a new bio-bot.

The new device is also made using a 3D-printed gel scaffold, but instead of heart cells, it uses skeletal muscle cells to move around. The contraction of the muscle cells is controlled by electric current. By varying the frequency of the current, researchers can make the bio-bots go faster and slower, or in absence of a current, turn them off.

The bio-bots’ overall design is also naturally inspired. The hydrogel is rigid enough to provide structural support, and at the same time, it can flexibly bend like a joint. The muscle cells are affixed to two tendon-like posts that serve double duty as the bot’s feet.

The researchers think the bio-bots may prove useful in medicine or in the environment.

“It’s exciting to think that this system could eventually evolve into a generation of biological machines that could aid in drug delivery, surgical robotics, ‘smart’ implants, or mobile environmental analyzers, among countless other applications,” said Caroline Cvetkovic, co-first author of the paper.

In the future, the researchers hope to make the hydrogel backbone capable of motion in multiple directions, instead of just a straight line. And they may integrate neurons to steer the bio-bots using light or chemical gradients.

“Our goal is for these devices to be used as autonomous sensors, ” said study leader Rashid Bashir. “We want it to sense a specific chemical and move towards it, then release agents to neutralize the toxin, for example. Being in control of the actuation is a big step forward toward that goal.”