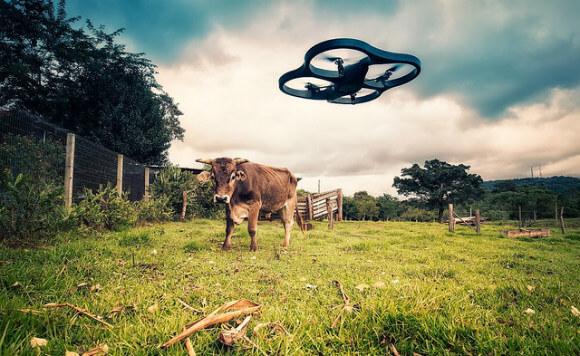 If you think today’s drones are interesting, you ain’t seen nothing yet.

Drones are in their deceptive phase, about to go disruptive. Check out where they’re going…

The billion-fold improvement we’ve seen between 1980 and 2010 is what makes today’s drones possible, specifically in four areas:

1. GPS: In 1981, the first commercial GPS receiver weighed 50 pounds and cost over $100K. Today, GPS comes on a 0.3 gram chip for less than $5.
2. IMU: An Inertial Measurement Unit (IMU) measures a drone’s velocity, orientation and accelerations. In the 1960s an IMU (think Apollo program) weighed over 50 lbs. and cost millions. Today it’s a couple of chips for $1 on your phone.
3. Digital Cameras: In 1976, Kodak’s first digital camera shot at 0.1 megapixels, weighed 3.75 pounds and cost over $10,000. Today’s digital cameras are a billion-fold better (1000x resolution, 1000x smaller and 100x cheaper).
4. Computers & Wireless Communication (Wi-Fi, Bluetooth): No question here. Computers and wireless price-performance have gotten a billion times better between 1980 and today.

1. Agriculture: Drones watch for disease and collect real-time data on crop health and yields. This is an estimated $3B annual market size.
2. Energy: Energy companies monitor miles of pipeline and oil rigs with autonomous drones.
3. Real Estate and Construction: Drones photograph, prospect and advertise real estate from golf courses to skyscrapers; they also monitor construction in progress.
4. Rapid Response and Emergency Services: Drones aid in search and rescue operations ranging from forest fire fighting to searching for people buried in rubble or snow using infrared sensors.
5. News: It’s faster and safer to deploy drones to cover breaking news/disaster/war zones than news crews.
6. Package/Supply Delivery: Companies like Matternet (founded at Singularity University) are building networks of UAVs to deliver food and medical supplies to remote villages around the world.
7. Photography/Film: Visual artists use drones to capture beautiful new images and camera angles.
8. Scientific Research/Conservation: Drones assist in everything from counting sea lions in Alaska to conducting weather and environmental research to tracking herd movements on the Savannah in Africa.
9. Law Enforcement: Drones can be used during hostage situations, search and rescue operations, bomb threats, when officers need to pursue armed criminals, and to monitor drug trafficking across our borders.
10. Entertainment/Toys: Good old fun.

What happens in the next 10 years when drones are 1000x better? Or 30 years from now when they are 1,000,000,000x better? What does that even mean, or look like? Here are some directions for your imagination:

Smart and Autonomous: Drones will have a mind of their own… thinking, doing, navigating, avoiding, seeking, finding, sensing and transmitting.

Microscopic and Cheap: Think about drones the size of a housefly, sending you full-motion HD video. Think swarms of drones (hundreds) where losing half of your swarm won’t matter because another hundred are there to replace them. How much will they cost? I would be shocked if they price doesn’t plummet to less than $10 each… maybe $1.

1. Pollination: Imagine bee-sized drones pollinating flowers (in fact, we’re actually doing this now);
2. Personal security: In the future, your children will have a flotilla of micro-drones following them to school and to playgrounds at all times, scanning for danger;
3. Action sports photography: Imagine 100 micro-drone-cameras following a downhill skier capturing video from every angle in real time;
4. Asteroid prospecting and planetary science: On a cosmic scale, my company Planetary Resources is building the ARKYD 300 — effectively a space drone with 5km per second delta-V. PRI plans to send small flotillas of four to six A300 drones (with onboard sensors) to remote locations like the asteroids or the moons of Mars;
5. Medical in-body drones: On the microscopic scale, each of us will have robotic drones traveling through our bodies monitoring and repairing;
6. High Altitude “Atmospheric Satellite” Drones: Google recently announced Project Loon to provide a global network of stratospheric balloons, and then acquired Titan Aerospace to provide for solar powered aerial drones, both of which could blanket the entire planet to provide low-cost Internet connectivity, anytime, anywhere; and,
7. Ubiquitous surveillance: Combined with facial recognition software and high-resolution cameras, drones will know where everybody and everything is at all times. Kiss privacy goodbye. Are you a retailer? Want to know how many people are wearing your product at any time? Future imaging drones will give you that knowledge.
8. Military and Anti-terrorism: Expect a significant increase in defense-related applications of drones in war zones and in your local backyard, sensing and searching for dangers ranging from biological to radiation.

What are the Challenges?

There are concerns over privacy and spying, interference with planes/helicopters, drones aiding illegal activities, safety and potential crashes, noise and cluttering the skies, theft and commercial use.

I recommend looking at the FAA Modernization and Reform Act of 2012 to get a glimpse of the legal landscape surrounding drones.

This bill expires in September of 2015.

In other words, pending major legislative changes, expect 2015 to be a big year for drones.

Why are drones going to be disruptive?

Besides all of the use cases outlined above, drones represent an interesting convergence of three exponential technology areas:

1. The Internet of Everything: Drones will be a key part of our trillion-sensor future, transporting a variety of sensors (thermal imaging, pressure, audio, radiation, chemical, biologics, and imaging) and will be connected to the Internet. They will communicate with each other and with operators.
2. Advanced Battery Technology: Increases in energy density (kilowatt-hours per kilogram) will allow drones to operate for longer periods of time. Additionally, solar battery technology is allowing high-altitude drones to fly for weeks at a time without landing.
3. Automation Software and Artificial Intelligence: Hundreds of teams around the world are working on automation systems that a) make drones easier for untrained users to fly, but more importantly, b) allow drones to fly and operate autonomously.

This is just the start.

At my Abundance 360 Executive Summit in January 2015, we’ll discuss this in much more detail and talk about potential investment opportunities in this arena. If you’re interested in joining me, there are only a few slots left. Apply here.

Every weekend I send out a blog like this one with my latest insights on technology. To make sure you never miss one, head to www.AbundanceHub.com to sign up for this and my Abundance blogs. And if you want my personal coaching on these topics, consider joining my Abundance 360 coaching program for entrepreneurs.